This is an engaging middle grade/young teen fantasy adventure.
The Rampart Guards: Chronicle One in the Adventures of Jason Lex
Written by: Wendy Terrien
Narrated by: Brian Callanan 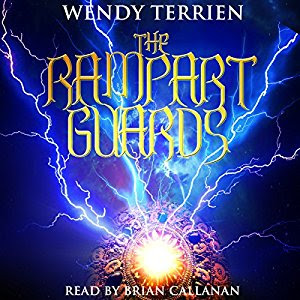 Publisher's Summary
The Rampart Guards is an adventure and coming-of-age story about a young man, Jason Lex, coping with the loss of his mom and the discovery that the world is not exactly as it seems. Creatures of legend live among us. Grown-ups don't always make the best decisions. And sometimes choosing to trust is a tough, even dangerous decision.
After his mom disappears, Jason Lex and his family move to a small town where he has no friends, no fun, no life. Things get worse when he's chased by weird flying creatures that only he can see. Jason thinks he's losing it.
But when he discovers new information about his family, he's stunned to learn that creatures like Skyfish, Kappa, and the Mongolian Death Worm aren't just stories on the Internet - they're real, and they live unseen alongside the human race. Many of these creatures naturally emit energy capable of incinerating humans. An invisible shield keeps these creatures hidden and protects the human race from their threatening force. But someone - or something - is trying to destroy it.
Unsure who he can trust, Jason is drawn into the fight to save the people closest to him, and he finds help in surprising places. Confronted with loss, uncertainty, and a devastating betrayal, he must make a gut-wrenching decision: who lives and who dies.
©2015 Wendy Terrien (P)2016 Wendy Terrien


Review:
Jason Lex is just a young teen when his mother disappears. His father moves the family, Jason, his older brother, Kyle, and his younger sister, Della, to a new town near his grandmother and uncle. Jason is struggling and things get worse when he begins to see swarming fish diving at him in the sky. His father warns Jason away from his Uncle Alexander, his mother’s sister, who studies cryptozoology and is known for strange behaviors.

Slowly Jason begins to learn that there are creatures that exist that are not known by the public. He suddenly has physical skills, like lightning bolts from his hands, that he doesn’t understand and can’t control. Then he is approached in secrecy by his mother. He is lured to help her but realizes he has to make a hard choice to prevent the destruction of his family, friends and the world as he knows it.

The story moves along quickly with danger and light action. Jason faces a lot of new challenges – new facts and betrayals -- in a short time. The adventure is fun, if not always quite plausible. But it is a fantasy adventure after all. I was disappointed by a little bit of language although that isn’t unrealistic.

I do think that middle graders/young teens would enjoy this as would fantasy, adventure, light sci fi fans. The end has a bit of a twist and I was glad to have book 2 to follow the adventure.

Audio Notes: Brian Callanan does a good job with the narration. He gives personality to the characters with appropriate voices and emotions. The narration added to my enjoyment of the story.


I received this title from the narrator. It qualifies for my Audiobook Challenge.
Posted by Martha Eskuchen at 10:57 PM