This is a good sequel which brings the reader/listener into a tense battle for survival of the species.
Breakthrough: The Great Martian War, Book 2
By: Scott Washburn
Narrator: Ray Greenley 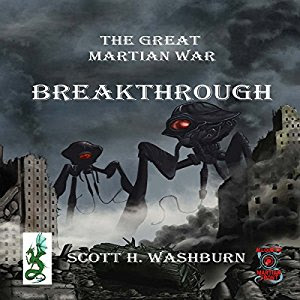 Publisher's Summary
This is the second of the three-part series covering the opening salvo of the Great Martian Invasion. US forces recover from the initial shock of the Martian invasion of the Southwest and attempt to set up a defensive line along the Mississippi. The best minds in the US try to come up with ways to defeat the Martians using the little captured technology available to them. Meanwhile, President Roosevelt tries to rally world leaders to aid in stopping the invaders.
©2016 Scott Washburn (P)2017 Scott Washburn


Review:
I enjoyed coming back to these characters. The conflict continues between the Martians and the 1909-10 version of the US forces under the commander in chief, Theodore Roosevelt.

The Americans are improving their technology, but it is still not enough. They may have a few successful encounters but the battles are still being controlled by the Martians. The Martians target the transport systems (railroads) in order to limit the tanks and other equipment that the humans can bring to the fight.

The story follows the primary characters from book one, both US and Martian. Andrew Comstock has been promoted and is still working in the ordinance department to help develop improved weapons that can increase the American chances in the war. He travels from D.C. to Niagara Falls to observe Tesla testing the Martian lasers. Then he travels to Santa Fe where he is commanded to head a force in the field.

The young farm girl who survived the battle in book one has become a nurse who longs to fight the Martians up close and personal. She is very close to the front lines and involved in caring for physical and mental injuries inflicted upon prisoners who are rescued from the Martian home hold.

Qetjnegartis is a Martian warrior in the home hold who is fighting for his race. He has a “bud” (an infant) whom he is training as one of the replacement corps. The Martians have their own reasoned strategy as they fight for survival and, sadly and frighteningly, elimination of the human population.

Mr. Washburn writes a convincing and engaging plot. He has developed likeable characters, US and Martians. The story has good action and interesting social growth and interaction. I recommend this to fans of the original story (War of the Worlds) and those who enjoy engaging sci fi. I look forward to more in the series.

Audio Notes: Ray Greenley does a wonderful job with the narration. He provides strong, distinct voices and carries the action forward. The narration enhances the story for me.


I received this Audiobook from the narrator as a follow up to the first book. :-)
Posted by Martha Eskuchen at 10:33 PM