This has lots of 'James Bond' type action with sizzling chemistry between the characters.
The Fabergé Entanglement
by Lesley Meryn and Elle Brookes 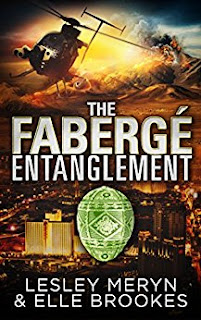 Sabinne ‘Saber’ Darrieux’s father, the billionaire CEO of Frontenac Global Security has been kidnapped. His ransom is not cash in a numbered offshore account, or a briefcase of Bearer Bonds but something utterly unique, incredibly valuable, and until recently, hidden away from the world.
The kidnapper seems to know Saber very well, and knows that the next day, through her work as an elite translator she will be in the same location as the Object. She must steal the Object and deliver it to the kidnapper to ransom her father.
Adrian Steele, a British Intelligence agent has just come off of two harrowing missions. Upon returning to London for a well-earned rest, he learns that his friend and fellow agent, has been murdered in Moscow, but not before he made use of a unique Object as a mobile ‘drop site’ for the valuable intelligence he was carrying.
The drop site is traveling from Moscow to England. Steele insists on completing the mission to honor the death of his friend, Gerry Cornell.
At an ultra-chic quasi-diplomatic gathering in a mansion in Windsor, England, Saber and Steele meet and find themselves faced with a powerful, undeniable attraction. But at the moment, this compelling attraction is very inconvenient.
In reality they are at the mansion to check out the security arrangements — for their own reasons — to steal the Object, a Fabergé egg worth thirty million dollars. But who will get to the egg first?
Fabergé eggs are very famous for their unique surprises. Saber and Steele are about to be very surprised, indeed.
And when Saber clashes with Steele; more than sparks will explode!


Review:
Sabine is a beautiful, captivating woman who would rather be respected for her skills than her looks. Her family built its fortunes on thievery, but her father has moved the family businesses into legitimate fields. Sabine is one of their experts in security services and works as an elite translator when she is not accessing and improving security systems.

Sabine’s father has been kidnapped and the ransom message directs her to steal a Fabergé egg to exchange for her father’s life. Sabine happens to be attending the function where the egg is displayed. When she sneaks back to steal the item, she is surprised to bump into a handsome man who also wants the egg. Only one of them can succeed and Sabine is desperate.

Adrian Steele is a British Intelligence officer who just learned of a fellow agent’s murder. Although Steele should be going into down time, he pushes for the assignment to complete his friend’s mission. He is to ‘pick up’ a certain Fabergé egg as it has secrets hidden within it.

Steele is struck by a beautiful woman he sees during the party while casing the setting of the eggs. Later he is stunned to find her trying to steal the egg he needs to get. When she wins the first encounter to make off with the egg, Steele is determined to follow her to find out what her purpose is.

Sabine and Steele have zinging chemistry from the moment they see each other across a crowded room. Neither are accustomed to such reactions and it puts them off balance. Their opposing interests in the egg and powerful attraction to each other make for fun cat and mouse, back and forth, attention and dialogue.

The story starts with a little background set up but soon kicks up to fast-paced, pretty much nonstop action. The pair travels from London to LA juggling the egg along the way. Steele is aware that he is not the only one following Sabine. It will be a race to see who gets the egg and whether Sabine can save her father.

Steele is a character who had me thinking of a mix between James Bond and MacGyver. Sabine fits right along like a slick female operative even though she isn’t one. This is strong romantic suspense with a good plot and magnetic characters, I recommend this to readers who enjoy good action and romance with a lot of heat but without unnecessary graphics.


I received this title through iRead Book Tours.


Meet the Authors:
LESLEY MERYN
Enjoyed an exotic, adventure-filled childhood, following her anthropologist father and travel writer mother to the farthest corners of the world. She later took inspiration from her Aunt Sophia Francesca and became the author of romantic adventure novels. She alternates her time between Los Angeles, and a family property located in Yorkshire England.


ELLE BROOKES
She is the author of the first two books of the Time Frame Series, LUST. MECHANICS. MINI COOPER. and SEX. COFFEE. TIME TRAVEL. Loves travel, discovering new foods to try, reading and writing. She currently lives in the central highlands of Costa Rica with her dog Pixie and her hedgehog Quiller.