Audio Book Review: The Case of the Cursed Dodo by Jake G. Panda 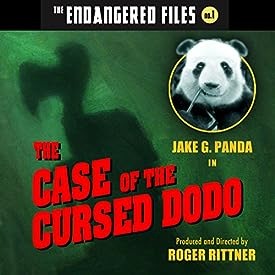 Duration: 2 hrs and 34 mins
This came in just in time for my post tonight.
And I was looking for a lighter audio to listen too.
I received this from the author, Jake!
Publisher's Summary
Listen up. If you're looking for trouble, you've found it. His name's Jake G. Panda and he's a wildlife investigator. This hard-boiled bear works at a flophouse for endangered critters called the Last Resort. He's the hotel snoop. The resident fuzz. It's his job to keep these unusual guests safe and outta harm's way.
This hilarious first installment of The Endangered Files is a wild and woolly mystery involving a missing guest, a green bird, and a bunch of double-crossing critters all hot on the trail of The Cursed Dodo. It's designed to introduce young listeners to the subject of endangered species in a fun and informative way.
So join this tough talking panda detective and a cast of endangered creatures on a globe-trotting audio adventure that will appeal to young and old alike.
©2014 Jake G. Panda (P)2017 Jake G. Panda


Review:
Jake G. Panda is a bold wildlife investigator. He cares about the people/critters he lives with at the Last Resort, a hotel where endangered species gather. Jake is quick to set out to investigate when one of the hotel guests calls in while on exploration and the call is cut off.

Jake races off to foreign lands to rescue the Professor, a rare Hispid hare. Jake soon finds himself and a few friends tricked and captured. A small thing like a cage won’t stop Jake and his cohorts. As they chase down a suitcase with a rare green dodo, Jake comes across old friends, including a very special one from his past.

Other employees at the Last Resort include Rose, an El Hierro giant lizard, Gloria, a Mexican grizzly who works the front desk, and Timmy a Round Island day gecko selling newspapers in the lobby.

The enemy critters include a wild yak, a one-eyed cave salamander, a large slithery, Bimini boa, with his much-abused assistant, the shrew. They are countered by the Endangered Underground. This wildlife resistance who fight against the human intruders, are led by the legendary Diego “the Desert Rascal”, a Mexican prairie dog and Lieutenant Nina, a Tehuantepec jackrabbit.

This is a fun, quick tale that describes endangered species. Jake and critter friends run through several dangerous situations and share some lessons along the way. The presentation of the story is unusual as it is set up like a screen play with ‘fade in’ and ‘fade out’ scenes. Although I found this to be fun, I am not sure how children would follow the scene changes. Also, the detective tone has a noir atmosphere and some of the fun irony will be lost on children. I liked the characters, sass and mystery. I note that the kindle version has images that might be more engaging for children. However, as an adult I thoroughly enjoyed the audio.

Audio Notes: The audio book has a cast of narrators who bring the various characters to life. I found myself smiling and chuckling through the listen. I am glad I had the opportunity to enjoy this.


I received this from the author. It adds to my Audio Challenge.
Posted by Martha Eskuchen at 8:24 PM