Available August 27, 2017. I have received this title and will be reading it next week for review. 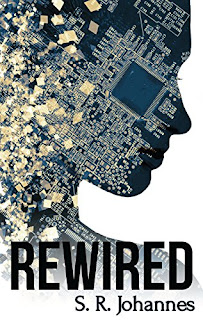 ReWired
by S.R. Johannes
16-year-old Ada Lovelace is never more alive and sure of herself than when she’s hacking into a “secure” network as her alter ego, the Dark Angel. In the real world, Ada is broken, reeling from her best friend Simone’s recent suicide. But online, the reclusive daughter of Senator Lovelace (champion of the new Technology Privacy Bill) is a daring white hat hacker and the only female member of the Orwellians, an elite group responsible for a string of high-profile hacks against major corporations, with a mission to protect the little guy.

Ada is swiftly proving she’s a force to be reckoned with, when a fellow Orwellian betrays her to the FBI. To protect her father’s career, Ada is sent to ReBoot, a technology rehab facility for teens…the same rehab Simone attended right before killing herself.
​
It’s bad enough that the ReBoot facility is creepy in an Overlook-Hotel-meets-Winchester-Mansion way, but when Ada realizes Simone’s suicide is just one in an increasingly suspicious string of “accidental” deaths and “suicides” occurring just after kids leave ReBoot, Ada knows she can’t leave without figuring out what really happened to her best friend. The massive cyber conspiracy she uncovers will threaten everything she cares about–her dad’s career, her new relationship with a wry, handsome, reformed hacker, Fisher, who gets under her skin, and most of all–the Dark Angel.

ReWIRED is about the daily choices we all make about who we want to be, how much of ourselves we choose to share with others, and the terrifying risks and exhilarating rewards of being ourselves, online and off.

What others are saying:

"Delving into the world of underground hacking, REWIRED crackles with tension. I loved every cyber-second I was immersed in Ada's world!”— Kimberly Derting, author of YA thriller series' The Body Finder, The Pledge, and The Taking.

"Timely and terrifying, Johannes shows us just how easy it is to find a trapdoor into anyone's life. I'm never getting on the internet again."— Romily Bernard, author of YA thriller series, Find Me and Never Apart (2017)

"ReWired is a tenderhearted, thought-provoking young adult thriller that makes you update your passwords and call your best friend (and request to hang out away from all video feeds.)" —Courtney Stevens, author of Dress Codes for Small Towns and Faking Normal.

The lab smells like burned toast.
Fisher races back in the room. “Ada, I think this place is on fire. We gotta go.” When I finish uploading the files, he grabs my hand and yanks me out of the room.
We race down the hall and push through a door that leads us to an empty stale room with nothing but a mahogany fireplace in one corner. The small space is already filling with thick, black smoke, and the heat is unbearable. When I glance back, the steel door starts to turn red from the intense temperatures.
This must be what hell feels like.
Fisher tugs on my sleeve. “This place is going to torch quickly. It’s a freakin’ tinderbox.”
And he’s right, the place is already blazing with fire. My eyes burn as I cover my mouth with my shirt, coughing. “Which way?”
“There.” He points in the opposite direction.
As we weave through the labyrinth of suffocating rooms and tiny hallways, neither of us speaks. The air is heavy with soot, burning my throat. Thick gray spirals of smoke crawl out of the cracks in the walls, curling finger-like tendrils around my throat.
I try to control my smoke intake. “Now what?” I choke out.
“Breathe shallow, stay low, and keep moving.” He hands me his handkerchief. “Keep this over your mouth.”
We wind through the twisting hall until we reach a stairway. Flames nip at our heels like a pack of seething dogs. The searing air singes the tiny hairs on my face. I panic and gulp in dirty air, igniting a fit of hacking. The fire alarm remains silent, so I’m guessing help is out of the question. It’s possible that no one at ReBoot is aware of the danger stewing behind the main house.
I holler into the rag, muffling the rising panic in my voice. “We’re trapped!”
Fisher dashes around, frantically opening and slamming cupboards, searching for a hidden escape route. In this place, you never know. The fire prowls across the floor, roaring at anything in its path. The flames chase us, rolling in from all sides.
Fisher steps on a trapdoor in the floor. “Here!” He dusts off the opening with his shoes and jerks the round latch. The wood planks squeak open, revealing a kitchen on the floor below us. He drops through the hole and lands in a kneeling position on the rusted stove.
A beam in the ceiling splits and comes crashing down behind me. I scream and lower myself through the opening, hanging by my hands.
“Drop!” Fisher screams.
I release my grip and hit the counter.
This time, he breaks my fall by grabbing my waist, but pain sears through my sore leg. I crumple to the floor. Without missing a beat, Fisher scoops me up and races toward an exit, half carrying me.
Somewhere in the maze, a door slams. Clunky footsteps cross the floor moving closer and closer.
“Someone’s chasing us,” I hiss under my breath.