Oh boy! This is a wonderfully gripping story. 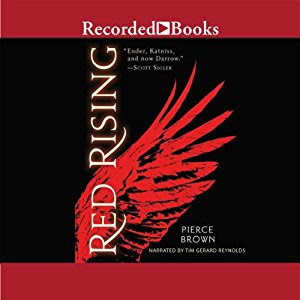 
Publisher's Summary
Darrow is a Red, a member of the lowest caste in the color-coded society of the future. Like his fellow Reds, he works all day, believing that he and his people are making the surface of Mars livable for future generations. Yet he spends his life willingly, knowing that his blood and sweat will one day result in a better world for his children. But Darrow and his kind have been betrayed. Soon he discovers that humanity reached the surface generations ago. Vast cities and sprawling parks spread across the planet.
Darrow - and Reds like him - are nothing more than slaves to a decadent ruling class. Inspired by a longing for justice, and driven by the memory of lost love, Darrow sacrifices everything to infiltrate the legendary Institute, a proving ground for the dominant Gold caste, where the next generation of humanity's overlords struggle for power. He will be forced to compete for his life and the very future of civilization against the best and most brutal of Society's ruling class. There, he will stop at nothing to bring down his enemies...even if it means he has to become one of them to do so.
©2013 Pierce Brown (P)2014 Recorded Books


Review:
Darrow is a Red who are the lowest, the slaves, in the caste society system on their planet. The Golds are the ruling class, governing with arrogance and impunity.

The Reds live and work underground, drilling the mines they believe ‘will someday make the surface of Mars livable for future generations’. Darrow likes his dangerous mining job and he is the best. Although he and his clan have exceeded the others, the incentive award is always given to a more favored clan. Darrow shrugs this off, but his young, spirited wife, Eo, objects. She challenges him to take a stand and live for more.

Eo rebels in a forbidden act and becomes a martyr. Darrow seeks to end his own life but is tricked, revived and shown that the society he knows is built on lies. He is asked to become a tool of rebellion. He is to be transformed into a Gold so he can infiltrate the enemy.

After his painful transformation, Darrow passes the entry tests and is admitted to the Gold Training Institute where the top students go through a draft selection to become a group under the governing Gold houses. Darrow is an unknown but has done well enough in the preliminaries to be picked early by the house of Mars, because of his underlying rage tendencies.

The eight houses of students are placed in a community where they must attempt to protect their own house standard while capturing the others. The ‘games’ are overseen, rather loosely, by the house proctors who watch from ‘Olympus’, and occasionally provide supplies and aid

Darrow makes friends and enemies before the draft and after. The first test for everyone is shocking. Then the survivors must pull together to find a leader, the primus, to direct them toward victory. Clearly, the primus of each house will be in a favored position for selection once the games are concluded. Darrow is intent on being primus of his house although it pits him against the son of one of the top ruling houses of Golds.

Darrow faces many struggles – first to survive and then to win. He must learn to control his rage as he tries to outwit others. Some friends become enemies and he is never totally sure whom he can trust. He discovers treachery and corruption. He doesn’t intend to comply with the corrupt plans of the proctors. He intends to win in the end … if only he can survive the betrayal of friends and the assassination attempts of the interfering proctors.

This is a gripping story with great world building and interesting character development. I was quickly pulled into the story and cared about several characters. There is brutality, loss and sadness with only a few scenes to celebrate – like the surprising twist before the game ends. I was a little surprised by Darrow’s choice at the very end but it makes absolute sense for what he needs to do for his people, the Reds. I will be getting the next book soon. I recommend this to fans of dystopia stories and The Hunger Games with the caution that this is dark and brutal.

Audio Notes: Tim Gerard Reynolds does a wonderful job narrating. He provides voices and emotions that bring the characters alive and moves the story forward. This is engaging listening entertainment and I plan to listen to the rest of the series.

(I note that the ebook/print has a map at the beginning that shows the battle fields and might be of interest to listeners.)


This is another from my Audible shelf. It qualifies for Mount TBR, Audio Book Challenge and "R" in my Alphabet Challenge.
Posted by Martha Eskuchen at 3:51 PM