This is an engaging and realistic post-apocalyptic story.
The Borrowed World: A Novel of Post-Apocalyptic Collapse, Volume 1
Written by: Franklin Horton
Narrated by: Kevin Pierce 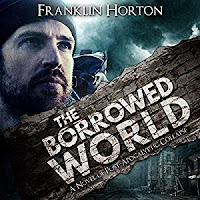 Publisher's Summary
In a night of devastating terror, ISIS operatives have unleashed a coordinated attack on America's infrastructure. Life as we know it in America grinds to a halt as the electrical grid collapses, communication networks are damaged, critical bridges and dams are destroyed, and major fuel refineries go up in massive fiery clouds. When the government responds by immediately halting fuel sales to the public, Jim Powell finds himself in a terrifying predicament - trapped five hundred miles from home with a group of coworkers.
With thousands of trapped travelers and scarce law enforcement, the miles between Jim and his family become a brutal gauntlet where the rules of civilized society no longer apply. As Jim puts his years of preparation and planning to the test, he is forced to ask himself if he has what it takes to make it home. Does he have the strength - the brutality - required to meet this new world toe-to-toe?
©2015 Franklin Horton (P)2015 Franklin Horton


Review:
A coordinated terrorist attack strikes at the infrastructure of America, taking down bridges and dams and enough of the electrical grid to shut down much of the food delivery and communications systems. Jim Powell and several co-workers are five hundred miles away from home attending a work conference. Jim and his friend, Gary, are preppers who have been expecting trouble and are prepared. The four ladies with them are skeptics and not all cooperative. They do not believe Jim’s explanations of the downward societal spiral that will occur. Still, they all agree to get back in their cars and head for home.

They soon run into difficulties as the government seizes control of all fuel sources leaving them, and many others, stranded. The group are soon surrounded by erupting violence and hard decisions. One woman is killed by panicked gunfire and two others decide to go to a FEMA relocation camp. That leaves Jim, Gary and HHH to continue the long trek towards home.

Meanwhile, the story covers Jim’s family as they face dangers on their home turf. His wife, Ellen, thirteen-year-old son, Pete and eleven-year-old daughter, Ariel, prepare to face the deteriorating society. Jim has left supplies and instructions which the family quickly begins to follow. They life outside of the community but there is a transient trailer park down the road where the tenants soon threaten those they perceive as easy prey. They have no idea the steps a mother will take to protect her family.

This reminds me of the Survivalist Series by A. American that I have listened to. It starts out similarly and is also told, in parts, from first person view of the primary protagonist. Other portions are third person including some bits that are beyond Jim’s knowledge. I liked the addition of the home front point of view and both threads have plenty of action and danger. So far there is no addition of military cohorts but this is just book one.

The story moves quickly and, to me, it is realistic and gives practical aspects for preparing to face an EOTWAWKI (end of the world as we know it) scenario. There is some bad language and of course violence fitting the situation. I suspect I will continue to listen to this although I don’t feel compelled to rush to get the rest in the series just yet. I would recommend this to readers who enjoy the post-apocalyptic genre.

Audio Notes: Kevin Pierce does a good job with narrating. His voice fits Jim and although he doesn’t actually portray individual voices he manages to present the characters distinctly. I did enjoy this in audio format for the ease and engaging listen.


This is from my Audible TBR for Mount TBR, Audio Challenge and “B” in Alphabet Soup Challenge.
Posted by Martha Eskuchen at 12:12 AM