This was interesting but strange; not really my cup of tea.
AFTERLIFE
by Marcus Sakey 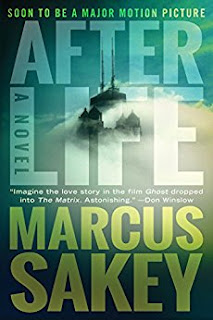 Soon to be a major motion picture from Imagine Entertainment and producers Ron Howard and Brian Grazer.
Between life and death lies an epic war, a relentless manhunt through two worlds…and an unforgettable love story.
The last thing FBI agent Will Brody remembers is the explosion—a thousand shards of glass surfing a lethal shock wave.
He wakes without a scratch.
The building is in ruins. His team is gone. Outside, Chicago is dark. Cars lie abandoned. No planes cross the sky. He’s relieved to spot other people—until he sees they’re carrying machetes.
Welcome to the afterlife.
Claire McCoy stands over the body of Will Brody. As head of an FBI task force, she hasn’t had a decent night’s sleep in weeks. A terrorist has claimed eighteen lives and thrown the nation into panic.
Against this horror, something reckless and beautiful happened. She fell in love…with Will Brody.
But the line between life and death is narrower than any of us suspect—and all that matters to Will and Claire is getting back to each other.
From the author of the million-copy bestselling Brilliance Trilogy comes a mind-bending thriller that explores our most haunting and fundamental question: What if death is just the beginning?


Review:
Brody is an FBI agent working under the direction of his boss, Assistant Special Agent in Charge, Claire, who is also his lover, behind the scenes. Their FBI unit is pursuing a serial killer who always seems to be one step ahead of the authorities… as though the killer has insider knowledge.

Brody and a team follow a lead to an abandoned church. It appears to be a false lead until Brody looks out a broken window and sees a man on a balcony watching him. The building explodes and Brody wakes up without an injury but he soon faces three derelict types who clearly wish him harm. He learns that he is in a world that is similar to his “real” life but more like an echo or ‘shadow’ world.

Claire gets a vision that directs her to track down the killer. Events unfold that put her into Brody’s world. But the killer is there too and he is extremely powerful in the shadow world. Brody and Claire want to be together but their nature to protect others compels them to face the powerful evil. They don’t fully think it through which propels Brody on another unexpected path.

I can’t describe too much in this story without leaking into spoilers. Early in the story I felt like I was reading a horror rather than a thriller. The story did get deeper and offers an unusual view of life after death as well as offering a view of how evil develops and grows. The story is engaging although I felt there were inconsistencies and certainly I don’t agree with the after-death scenario. I did like the strong love connection, the moral good and the key elements that made the difference between evil and good.

I didn’t enjoy this as much as The Brilliance Trilogy which I would rather see in film than this book. This is more sensational and apt to be a bit controversial. The writing is good and the story moves along well. Although I wasn’t enthralled, I would recommend it to readers who like dark thrillers and are willing to look at an alternate view of death.


I received this through NetGalley by invitation from Little Bird Publicity. It qualifies for my NetGalley Challenge.
Posted by Martha Eskuchen at 12:00 PM