I was drawn by this cover and enjoyed this sweet romance between injured parties. 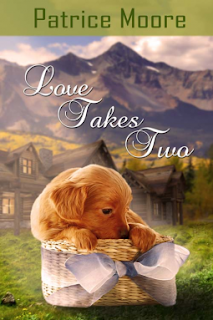 Single mom Molly Jenkins relocates to a small mountain town in hopes of removing her young son from bad influences. But Ken is caught in an act of vandalism on their neighbor’s ranch, and the no-nonsense owner informs Molly her son needs a man’s strong hand to keep him in line. Having been raised by a tough-to-the-point-of-cruel father, she doesn’t want her son to be guided by men like that. She believes he needs nothing more than security and lots of mother-love.

Nathan Jones knows what it’s like to be raised without a father, and he disagrees with the coddling Molly gives her son. His own upbringing led him to make some poor choices, and he wants to keep Ken from making similar mistakes. It is a complicated tangle of emotions and past hurts that prevent Molly and Nathan from agreeing, but can they come together to keep Ken from going down the wrong path…and maybe find their own path to love on the way?


Review:
Molly Jenkins was abandoned by her boyfriend and her overly strict father when she became pregnant at a young age. She struggled as a single mom to get through college and try to provide a decent life for her son, Ken. Now Molly is stymied by her sulky, twelve-year-old son who is making bad choices and leaning toward negative influences. Molly takes a job with a small-town school in Colorado hoping to remove Ken from serious trouble.

Before they can settle into their new home, Ken is caught throwing rocks on the neighbor’s ranch. Nathan confronts Ken and marches him home to announce his punishment will be to work off the harm he has done. Molly is wary, but agrees that Ken has to make up for the damage.

Nathan grew up without a father and was in trouble as a teen until his mother abandoned him to a boy’s ranch. Nathan doesn’t believe in love due to his mother’s abandonment. Nor does he believe in mother’s coddling as he is insistent that every growing boy needs strong male discipline to learn proper respect. Molly takes affront to Nathan’s attitude thinking he is insulting all the single mom’s that have worked so hard to raise good children.

Molly and Nathan butt heads, not only over Ken, but over Molly’s proposed project to open a community center for teens in the small town. Although Molly can’t deny that Ken’s behavior begins to improve under Nathan’s strong guidance, this doesn’t resolve the other conflicts between Molly and Nathan. It takes time for a loving family to help them to begin to soften their stubborn stances.

Ken witnesses a scene that triggers his rebellion again and the slow growing friendship between Molly and Nathan is challenged. Can they manage to find mutual ground to help Ken before he ends up in jail?

This is an easy read as the writing moved along well, although I noted several grammatical errors which may have been fixed before publication. The thirtyish characters were extreme in their opposite views but this made for the conflict that they had to work through. There is a puppy element so the cover was accurate to draw in a reader. I enjoyed the story and I recommend this to readers who enjoy small town romances with more mature (not YA or college) characters.


I received this title through NetGalley. It qualifies for my NetGalley Challenge.
Posted by Martha Eskuchen at 3:21 PM