This is an engaging shifter story with strong passion and a good plotline. 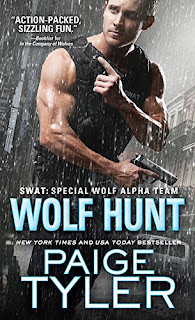 A STORM IS BREWING...
Remy Boudreaux is back in his hometown, New Orleans. He's there with three of his fellow Dallas SWAT officers for a week of training with the NOLA PD. On the eve of a tropical storm, Remy and his buddies prowl the French Quarter. One tantalizing scent captures Remy's senses, forcing him to follow until he is face to face with Triana Bellamy—his beautiful high school crush.
After reconnecting, Remy and Triana are close—very. Remy struggles to keep things casual. Ever since his partner—and first love—was killed on the job, he's kept women at a distance.
But when a mysterious wolf pendant ropes them both into danger, Remy's protective instincts kick in. He may have to reveal his true self...and hope Triana accepts him.


Review:
Remy is a Dallas SWAT officer visiting in New Orleans, his home town, for cross training with local cops. No one knows that the four Dallas men have special skills and they have to be careful not to expose their true wolf natures. Remy hits on an enticing scent and pulls his team mates along the night club route as he seeks out the source. Remy is surprised when his nose leads him to his high school crush, Triana.

Triana is a forensic lab tech who is in town to visit her mother. She is thrilled to see Remy as she had a crush on him too. The chemistry between them flares quickly even though Remy has convinced himself he doesn’t want to get too close to any woman since he suffered the loss of a partner whom he had fallen in love with.

Triana’s mother is being pressured to sell her husband’s special wolf pendant. Although she has told the buyer’s agent that she doesn’t have it, he won’t take no for an answer. Thugs return to put more pressure behind the request but they are surprised when Remy steps in to handle the threat. Although they retreat, the threat hasn’t disappeared.

Remy and his team are called upon to assist in a drug raid that leaves a lot of unhappy cops. Meanwhile, a tropical storm is bearing in on the city but these issues raise less havoc than the conflict Remy faces from trying to resist his natural instinct to protect Triana, especially since he won’t admit he could love her.

The story is full of action and steamy passion. It reads quickly and is engaging. The characters are likeable and although the romance is a bit hotter and the scenes a bit more prevalent than I care for, they don’t overshadow a strong plotline. The author does a good job of connecting Triana’s parents’ past with the current situation.

This is the first story I have read in this series and I enjoyed it even as a standalone. I am guessing that the earlier stories are of the other SWAT members finding and protecting their “true mates”. Since I enjoy a good shifter story now and again I will be keeping Ms. Tyler and this series in mind for future reading. I recommend this to readers who enjoy a passionate shifter romance with a strong story.


I received this title from the publisher through NetGalley. It qualifies for my NetGalley Challenge.
Posted by Martha Eskuchen at 10:28 PM