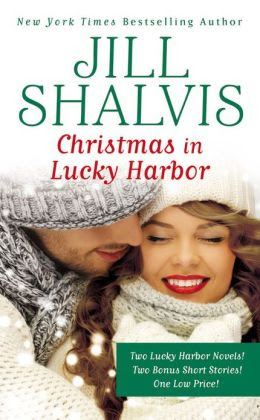 Simply Irresistible
After losing her boyfriend and her job, Maddie leaves L.A. to claim her inheritance-a ramshackle inn nestled in the little town of Lucky Harbor, Washington. She sees the potential for a new home and a new career-if she can give the inn the makeover it needs. Enter Jax, a tall, handsome contractor who knows exactly what Maddie needs...

The Sweetest Thing
Helping her sister set up the family inn is just the thing to make Tara forget her ex-husband and focus on her new life. Until she meets a sexy, green-eyed sailor determined to keep her hot, bothered, and in his bed. When her ex reappears, Tara must confront her past and decide what she really wants.

Kissing Santa Claus
NASCAR driver Logan Perrish returns to Lucky Harbor, Washington, with love in his heart and a ring in his pocket. But can Sandy Jansen forget the past and give him a second chance? Or will Logan be spending another Christmas alone?

Under the Mistletoe
There's no place like home for the holidays. And the Lucky Harbor Bed & Breakfast is bursting with festive lights and good cheer. But for Mia, Christmas is turning out to be anything other than merry and bright. Her recent break-up with her boyfriend Nick has made her return bittersweet. But then a surprise arrives, when Nick follows her to town bearing gifts - and asking for forgiveness.

The Sweetest Thing
Review:
4.25
Tara has returned to Lucky Harbor to help her sisters and to ‘find herself’ after divorcing Logan, her famous, dashing, race car driver husband. Tara tends to be the controlling, sophisticated and intense sister. She has determined that she needs to take control of her life after a rocky entrance into adulthood and then a high profile marriage where she gave all of herself until she got tired of being alone.

Her rocky teenage summer was spent in Lucky Harbor in a first romance with Ford, who went off to become a world traveling boat racer. Tara was surprised to discover that Ford had returned home and now is owner of the local bar in town. There is history between them that makes them hesitate to get together but the sexual pull still sizzles. Tara doesn’t want a hot re-run of her 17th summer and she isn’t quite ready to think that Ford could commit to something long term.

Logan comes to town to try to win back the love he lost and that gets Ford thinking he doesn’t want to lose Tara now that he has a second chance. As always in the small town of Lucky Harbor the busybodies stick their noses in. The social media buzzes with sneak images of encounters and a poll for which man will win her heart.

The story is fun and steamy. I really liked the warmth between Tara and Ford and Mia entering their lives adds extra complications. The sisters and their beaus add additional interest too. Ms. Shalvis does a nice job of providing characters a reader can root for as they push and pull their way to a happy ending.

Kissing Santa Claus
Review:
4.0
This is a quick novella that brings a happy ending for Logan. It is just short and sassy and a quick, fun read.  Logan had a quick affair with Sandy after Tara chose Ford. Then Logan left town. Now he is returning six months later and Sandy isn't sure she wants to welcome him so easily even if her body responds differently than her head.

I’m not sure how I would have felt about it if I hadn’t gotten to know Logan in The Sweetest Thing. The characters are not deeply developed but there is enough there, with enough story to make it a satisfying nugget.

Under the Mistletoe
Review:
4.25
The reader meets Mia in The Sweetest Thing too. There she was a 17 year old who became infatuated with the local, all around errand boy, Carlos, a good looking young man with attitude. But Carlos stayed home in Lucky Harbor while Mia took off for the adventures of college. Now it is four years later and Mia is hoping her college boyfriend, Nick, will join her at Christmas in Lucky Harbor and meet her family and friends.

Nick grew up in foster homes and learned not to get attached or allow others to get too close. He has  enjoyed his dating time with Mia but hasn’t really even acknowledged them being together as ‘a relationship.’ He hesitates when she invites him home and she determines that he isn’t ready so she leaves without him.

When he shows up in Lucky Harbor he has to face Mia’s family and old boyfriend too. Will Nick be able to get Mia to move past the hurt he caused and allow them a second chance?

This is another quick short story with two sweet characters. I like the personality that Ms. Shalvis gives to Nick as it is a good and realistic blend of lone wolf confidence and vulnerability. This one doesn’t have quite as much heat as the other books which is okay with me.

As a package of two full novels and two shorts this is a great deal. It offers fun reading for those who enjoy contemporary, sassy to sizzling, happy ending romance.


I received this book from Hachette/Grand Central for an honest review.

ENTER THIS GIVEAWAY for my review Copy.


For 3 Extra Bonus entries Visit the author's website and tell me something you find of interest; OR tell me about another book by this author that you enjoyed; OR comment on the review.

* This contest is open to U.S. address only.
* This contest will close 10 PM (Central) on January 3, 2014.
The winner will be randomly selected from all entries.
WINNER WILL BE ANNOUNCED after January 3, 2014.
Winners will have 72 hours to respond by email or the winners form linked in the announcement.
Posted by Martha Eskuchen at 5:30 AM