Book Review and Giveaway: Christmas at Harrington's by Melody Carlson

This is a charming story and lovely for Christmas.

Christmas at Harrington's
by Melody Carlson 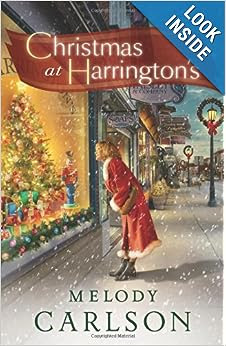 Book Description
Publication Date: October 1, 2010
Christmas is approaching, and Lena Markham finds herself penniless, friendless, and nearly hopeless. She is trying to restart her life after false accusations landed her in prison, but job opportunities are practically nonexistent. When a secondhand red coat unexpectedly lands her a job as Mrs. Santa at a department store, Lena finally thinks her luck is changing. But can she keep her past a secret?

This tender story about fresh starts will charm readers as all of Melody Carlson's Christmas offerings do. Full of redemption and true holiday spirit, Christmas at Harrington's will be readers' newest Christmas tradition.


Review:
Lena Markham was raised by a harsh, strict man who wanted to be a minister but didn’t quite make it. A charismatic man came as the new pastor to their community and Lena’s father decided that Daniel would make a good husband for Lena. Lena was happy with the idea of marrying Daniel and the marriage seemed okay at first. Lena was helping out by doing the financial bookkeeping for the church but then she realized that monies were missing...and she suspected it was her new husband. When the congregation learns of the embezzlement, Lena is blamed and convicted as her husband betrays her in court.

Eight years later Lena is released from prison and directed to start a new life in a new town. She is fortunate to make friends on the bus with a sweet elderly woman, Moira, who will be a neighbor in New Haven. After Lena gets settled in the boarding house she visits Moira who gives her some clothes, including a red coat with white fir trim. Lena is able to secure a job as Mrs. Santa at the local department store, Harrington’s. The children love her and she is a great success until a bitter woman from her old hometown recognizes her and threatens to reveal her pas.

The townspeople become divided as some want to condemn her for her past and others feel she deserves a second chance. Lena feels she has paid enough for crimes she didn’t even commit. She decides that she will stand up for herself and face the negative people. Lena finds courage, help and strength with the support of new friends. Two young girls, Moira’s granddaughter and the daughter of the owner of Harrignton, have an important influence and input in the story. Moira’s son, Sam, changes his tune from first judging Lena without knowing her, to seeking to clear her name.

My bookclub ladies and I found this story to be delightful. The only complaint was that it was too short as several wanted to know more of how Lena faired. The writing is very easy to read and the characters had warmth and depth. There were good discussions regarding judging others, how we react to those who have served time in prison and how even Christians can tear down people they should seek to help. We were glad that our second book by Ms. Carlson proved so much more likeable than our first read. Several of us are looking forward to reading more of Ms. Carlson, especially her Christmas stories.


This was our Ladies' Book Club read for December meeting.


For 3 Extra Bonus entries Visit the author's website and tell me something you find of interest; OR tell me about another book by this author that you enjoyed; OR comment on the review.