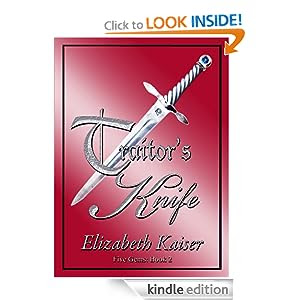 Book Description
Publication Date: July 8, 2013
When the loyalist cause enlists the mountain house into a weaponry, apprentice Fia is confronted with three refugee children, a disturbingly upstart former messenger, and accidents happening everywhere. Are saboteurs out to nix the weapons works... or is it the incognito crown prince they're after?

Traitor's Knife continues where Jeweler's Apprentice ended, and nearly seventeen year old Fia Brithin from the foothills still has a lot to learn about the mountains, and the people now in them.


Review:
Fia is a young lady who has been given a rare position as an apprentice jeweler under the royal household. She has developed a special friendship with the beleaguered royal family and especially their sole surviving son, Ilido. Now it is important to keep Ilido safe, in disguise and hiding as a commoner.

Fia travels with other refugees, befriending small children who lost their father and have to leave their mother behind with a sick infant. There is also a ragged looking former messenger, who tries to charm Fia into friendship.  Willex will rival Ilido but the reader suspects that he is more rogue than charmer.

Arriving at another stronghold, Fia rejoins old friends and her jeweler mentor determines that Fia has a knack for serving as a spy as well as an apprentice. It seems that Fia is a good listener and few would suspect her of watching and listening for secrets. One of Fia’s sisters shows up asking too many questions and they distract her by convincing her to use her healing skills to help the injured. The children continue to help Fia and offer sweet amusement.

The king’s supporters try to rebuild their resources to stand against the armies of the Barons who are expected to come up the mountain but accidents are obstructing the project. Fortunately Fia is always in the right place to help save Ilido from repeated assassination attacks. There is intrigue, sneaking thieves, spies, traitors and danger. There are strong characters to like, some to question as to motives and then dislike as true villainy is revealed.

The story reads easily and moves along well for the most part. It opens with a good hook and I enjoyed the steady story and action. The setting has a medieval feel and there are wonderful, full descriptive scenes.  There is also a bit too much minutia of activity that lengthens the story without adding to the plot.

This is a second in a series and although there is some hint at intrigue that placed Fia and her sisters in connection with the royal family it is never clearly explained. There is also a scene involving a special mountain gem which seems like it should be more developed since the series is called 'Five Gems'. Traitor's Knife is still interesting and engaging despite this and I would be interested in reading the first book and then continuing to follow Fia’s adventures. I recommend this to readers, young and old, who enjoy good story telling with warm characters, secret intrigues and adventure.


I received this from the author for an honest review.
Posted by Martha Eskuchen at 9:51 PM