Once again Ms. Hoyt does a good job of mixing action, lonely characters and a new chance at love.  Book 5 of this series.
Lord of Darkness (Maiden Lane)
Elizabeth Hoyt 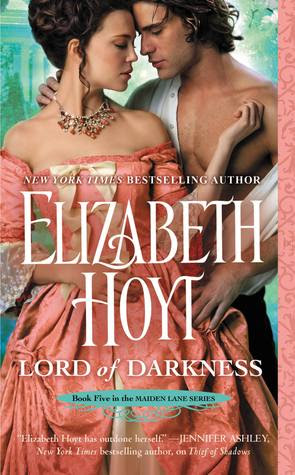 WHEN STRANGERS IN THE NIGHT
He lives in the shadows. As the mysterious masked avenger known as the Ghost of St. Giles, Godric St. John's only goal is to protect the innocent of London. Until the night he confronts a fearless young lady pointing a pistol at his head-and realizes she is his wife . . .

BECOME LOVERS . . .
Lady Margaret Reading has vowed to kill the Ghost of St. Giles-the man who murdered her one true love. Returning to London, and to the man she hasn't seen since their wedding day, Margaret does not recognize the man behind the mask. Fierce, commanding, and dangerous, the notorious Ghost of St. Giles is everything she feared he would be-and so much more . . .

DESIRE IS THE ULTIMATE DANGER
When passion flares, these two intimate strangers can't keep from revealing more of themselves than they had ever planned. But when Margaret learns the truth-that the Ghost is her husband-the game is up and the players must surrender . . . to the temptation that could destroy them both.


Review:
Lady Margaret’s secret fiancé, Roger, is murdered, supposedly by the Ghost of St. Giles. Margaret is grief stricken and even more distressed when she realizes she is pregnant. She is hastily married to Godric St. Johns and retires to his country estate. She loses the child and only returns to London for two reasons-- to seduce her husband in hopes of conceiving another child and to seek revenge against the man who murdered her true love.

Godric has shut himself off from the world after the lingering death of his beloved first wife. Godric agreed to a marriage of convenience and has been fine with Margaret away in the country. He is surprised when she shows up at his London home with his sister, a great aunt and a pregnant dog and no apparent plans to leave anytime soon. The home has been allowed to gather cobwebs with no female touch, minimal servants and a master who is disinterested. The only thing that Godric has been interested in is he secret activities as the Ghost of St. Giles. Meg is surprised to discover that her own husband is the dashing, confident Ghost who faces danger to protect innocents in St. Giles.

Although Godric at first refuses to become intimate with his wife, he is aware of the ‘light and laughter’ she brings into his home. He ends up striking a deal with Megs but what starts as duty soon flares to passion and slowly simmers in caring. Godric is the first to move beyond the past and determine that he wants a life with Megs. Margaret has not yet chosen to release her heart to love again. Now Godric must help her get beyond her obsession with the past so they may have a chance at a future, even as that chance is threatened by his own dangerous activities.

I enjoyed the growth of Meg and Godric as they give up their personal ghosts and learn that, as Godric says: “Life is by necessity for the living.” The sexual passion is steamy, real and loving. In addition to the growing romance, the story has plenty of action with Godric rescuing children and being relentlessly pursued by Captain Trevillion who is determined to catch the Ghost and is suspicious of Godric’s nighttime outings. I also liked the myth that is shared at the beginning of each chapter as a parallel to the story.

This is book five of the series and I suppose it might work as a stand alone. However, I do recommend reading the prior books to get the full enjoyment of the surrounding characters and the prior romances. I look forward to more adventures of the Ghost of St. Giles.


Godric stood, watching as Megs turned and beamed at him, all glorious, vibrant life. Everything he was not. Everything worth protecting. Location 2370.

I received this ebook through NetGalley from the publisher for an honest review and with the opportunity to host a Giveaway.

The wonderful team at Forever Romance at Hachette are GIVING A FULL PRINT SET OF ALL FIVE BOOKS IN THE SERIES to one lucky US winner!!


ENTER BY RAFFLECOPTER BELOW

* This contest is open US Only.
* No P.O Boxes.
* This contest will close 10 PM (Central) on March 22, 2013.
The winner will be randomly selected from all entries.
WINNER WILL BE ANNOUNCED on March 23, 2013.
Winners are asked to respond by email or the linked winners form within 72 hours of the announcement.