This is a family drama with intrigue and historical touches from the Holocaust as added interest.
White Picket Fences
UNABRIDGED
by Susan Meissner
Narrated by Bernadette Dunne 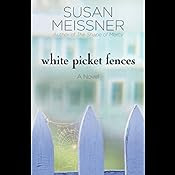 Publisher's Summary
When her black sheep brother disappears, Amanda Janvier eagerly takes in her 16-year-old niece, Tally. The girl is practically an orphan: motherless, and living with a father who raises Tally wherever he lands - in a Buick, a pizza joint, a horse farm - and regularly takes off on wild schemes. Amanda envisions that she, her husband Neil, and their two teenagers can offer the girl stability and a shot at a "normal" life, even though their own storybook lives are about to crumble.

Seventeen-year-old Chase Janvier hasn't seen his cousin in years, and other than a vague curiosity about her strange life, he doesn't expect her arrival will affect him much - or interfere with his growing, disturbing interest in a long-ago house fire that plagues his dreams unbeknownst to anyone else.

Tally and Chase bond as they interview two Holocaust survivors for a sociology project and become startlingly aware that the whole family is grappling with hidden secrets, with the echoes of the past, and with the realization that ignoring tragic situations won't make them go away.

Will Tally's presence blow apart their carefully-constructed world, knocking down the illusion of the white picket fence and reveal a hidden past that could destroy them all - or can she help them find the truth without losing each other?
©2009 Susan Meissner; (P)2009 Random House

Tally’s father is off on one of his many adventures having left her in the care of her grandmother. This is nothing new except that her grandmother has died and no one can reach her dad. Tally is suddenly brought home to live with her Aunt. Tally doesn’t want to tell Aunt Amanda where her dad has gone but she is becoming more concerned the longer he is out of touch. Amanda worries about her brother but also is worried for Tally’s state of mind.

What may appear at first to be a stable, normal home setting, complete with the “white picket fence”, turns into a stressed filled home. Everyone is keeping secrets and they are disrupting the family peace.

Chase has repressed memories from a traumatic fire when he was a child. Aunt Amanda wants to speak openly about the memories and get counseling help if needed. Uncle Neil doesn't think Chase remembers and he doesn't want to bring it up. Neil spends more and more time in the garage working on nice woodwork projects for others without recognizing that his wife and children feel that he has abandoned them.

Chase actually is struggling with the memories seeking to remember portions which have been blocked. While he tries to cope with this, he, Tally and Chase’s best friend work on a school project interviewing two men in a nursing home who lived through the Holocaust and helped to sneak babies out of the Ghetto.

There is very interesting history provided through the interviews of the delightful characters. Although the story starts a bit slowly, it twists with the intensity of Chase’s emotions, some not so appropriate choices by Amanda and some delightful connections that tie the characters.

I particularly liked a section where Chase has an epiphany and a new beginning. I also enjoyed the history of the German Ghetto which was new to me. My ladies book club all enjoyed the book but we felt there were some issues left unresolved. Reading through the author’s notes at the end of the print and Kindle version gave some perspective on this. The notes were not part of the Audible file.

The book is Christian fiction but not at all preachy and the characters are far from perfect. I recommend this story to those who enjoy intrigue in a family setting.

Audio Notes: I was very impressed with the narrator’s ability to capture the different ages, voices and emotions for the characters. It enhanced the story for me and made it move more quickly than reading would have.


I read this for my local Ladies Book Club. I downloaded it on Audible to speed my "reading" time.

ENTER THIS GIVEAWAY FOR PRINT COPY.

* This contest is open US Only.
* This contest will close 10 PM (Central) on March 22, 2013.
The winner will be randomly selected from all entries.
WINNER WILL BE ANNOUNCED on March 23, 2013.
Winners are asked to respond by email or the linked winners form within 72 hours of the announcement.
Posted by Martha Eskuchen at 5:00 AM