An okay read, but not as good as the other books in the series.
Free Fall (Elite Force)
by Catherine Mann 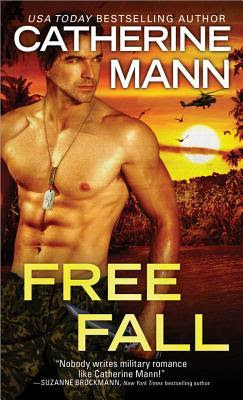 On This Mission, There Are No Accidents...

Pararescueman Jose "Cuervo" James is the guy they call for the most dangerous assignments. He lives for his job.

On a high-risk rescue deep in the African jungle, Jose encounters sexy, smart Interpol agent Stella Carson. They'd once had an affair that burned hot and fast, but family is everything to Stella, and Jose just can't go there.

Fate has thrown them into the deadly hot zone together, and sparks will fly...but only if they can live to tell about it.


Review:
Stella is a smart, sexy Interpol agent who specializes in codes. She meets Jose Cuervo pulling him and his PJ team out of the water on a dangerous mission. Jose pretty much sweeps her off her feet but Stella has the white picket fence and family in mind while Jose has hot nights with no kids in mind. Jose has his issues with family, and especially children, because of his own background. Although the two care for each other they split because of their different life goals.

Stella’s mother went off to missions work in Africa leaving the family behind when Stella was a vulnerable teen. Stella is determined to find more about her mother’s death while she is on duty in Africa. Stella is undercover with a group of students who are all caught by brutal warlords.  She is able to get a message out and Jose becomes part of the rescue team. Barely getting out, they stumble on an assassination plot against the First Lady who is about to arrive for a visit. There is a threat of biochemical attack and the author reveals a mole but it takes a while for Stella to uncover him.

The story started with great promise as it jumped right into intense action and then a teasing peek of anticipated romance. A good bit of the romance was told through an interesting technique of flashbacks as the couple thought back to how intense it was yet things didn’t work out.  The romance scenes were rather detailed encounters though not vulgarly graphic. I did like that “the lovemaking [was] a process rather than a goal.”

I have enjoyed other titles by this author but was a little disappointed by this one. The plot line seemed a bit scattered to me with many unrealistic pieces. I figured out the traitors but there was little depth to how the younger one got involved and the primary one was completely lame in the end. It really bothered me that Jose and Stella seemed at times too loose and distracted for their duties in spite of being fiercely dedicated to their intense jobs.  There was too much repetition on Jose’s issues and the difficulties in the relationship. The issues were realistic but the conflict became more annoying than tension building. The warmth of the comradery of the other team members seemed weaker in this book too. The whole book felt a little rushed to me resulting in an okay, but not wonderful, read.


I received this book from Sourcebooks for an honest review.
ENTER THIS GIVEAWAY FOR ARC COPY.

* This contest is open US and Canada Only.
* This contest will close 10 PM (Central) on April 5, 2013.
The winner will be randomly selected from all entries.
WINNER WILL BE ANNOUNCED on April 6, 2013.
Winners are asked to respond by email or the linked winners form within 72 hours of the announcement.
Posted by Martha Eskuchen at 5:00 AM