This is a fun fairytale told by a delightful Bard named Upon A. Time.


The Persnickety Princess (Tales from Upon A. Time - Book 1)
by Falcon Storm

About the Book - About the Author - Prizes!!!

About the book:
High up in the tallest tower of the purplest castle in the Kingdom by the Sea, Princess Lavender awaits rescue. Desperate as she may be, only the most dashing, well dressed, properly mannered prince will do. Oh, and he must stand exactly four and three-quarters inches taller than her. A princess has got to have standards, after all.

When, finally, one such prince comes to her castle—not to rescue her, but her younger sister—Lavender refuses to be ignored. Instead of waiting for the next suitor to come along, she devises a plan to put herself in danger, thus forcing the upstart prince to forget her sister and rescue her instead.

Well accustomed to getting her way, there is only one thing, unfortunately, that this princess can’t control—her luck. When her plans go awry, putting her in very real danger, will she allow the prince to rescue her as he sees fit? Will he even want to try?

And will anyone be able to find a way to rescue Lavender from her persnickety ways once and for all? Find out in this comedic tale of princes, dragons, and dreams that just may come true.

The Persnickety Princess is a lower grade chapter book intended for kids 6 to 9 years old (although kids of all ages are sure to enjoy it!


Pick up your copy through
Amazon, Barnes & Noble, Smashwords or Kobo Books. 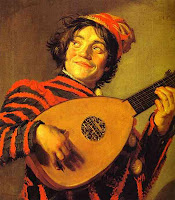 Review:
Upon A. Time is a Bard who gets caught on a stolen pig. He has to persuade the two city guards to let him go rather than put him in jail. He distracts them with an amusing tale about Lavender, a most Persnickety Princess.

Lavender lives in a purple castle with a resident witch to help ward off undesirable suitors. Princess Lavender has waited at her window a long time for the perfect Prince to rescue her. Finally Hugo the Happening, a handsome Prince who meets her criteria shows up. But instead of responding to her he rides off to rescue her sister, Petunia, who is carried away from the castle by a fierce dragon.  Lavender determines to put herself in need of rescue and ends up in one silly predicament after another. But every time she is in a fix, Hugo’s companion, Dave, who she believes is his squire, comes to her rescue instead of Hugo.

The story reads easily and is delightfully entertaining with a few twists and surprises. The descriptions include fun characters, a few creatures and settings fitting to a fairytale castle and surrounding forest, including Mount Chipmunk, which Lavender renamed Mountain of Horribleness.  Upon plays a fine trickster. I think this story could be enjoyed by middle graders as well as younger. It will be fun for parents to read to their children too. I appreciated the light break from my usual reading of romances and thrillers.

I received this ebook for review as part of Novel Publicity Book Tour.

About the Author, Falcon Storm

I was born in the frozen wasteland of Alaska with the unfortunate stigma of being both a daydreamer and left-handed. Starting from an early age, I’ve filled my life with stories of every sort from my father’s hunting trips to the Holy Trilogy (read: Star Wars). In the fourth grade, I became more interested in telling stories of my own than listening to those of others.  Doctors—being doctors—attempted to medicate them out of me, but the best cure has always been a pen, a notebook, and my crazy, unrestrained imagination.
I continue to whittle away at these stories in my endless search for the one that will finally bring me back to reality. All the while, I secretly hope such a story will never come along. I hear “reality” is far too boring.
Connect with Falcon on his website, Facebook, GoodReads, or Twitter.

About the prizes: Who doesn't love prizes? You could win (1) a $25 Amazon gift card, (2) a $50 Amazon gift card, or (3) a Princess Prize Pack, which includes a plush purple dragon, necklace with lavender pendant, The Fairy Godmother's Guide to Being a Princess, tiara and wand party set, and a DVD of The Princess Bride.

Here's what you need to do...
That's it! One random commenter during this tour will win the $50 gift card. Visit more blogs for more chances to win--the full list of participating bloggers can be found here. The other two prizes (including the awesome Princess Prize Pack) will be given out via Rafflecopter. You can find the contest entry form linked below or on the official Persnickety Princess tour page via Novel Publicity. Good luck!