This story has wonderful settings for a saucy and emotional romance.
Girl vs. Earl
by Phillipa Ashley 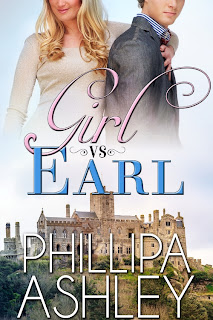 US edition Published March 26th 2013
When Miranda finds herself fighting for her home, her job and her heart, sleeping with the enemy may not be the best tactic...

With no family of her own, Miranda Marshall has developed a healthy respect - some would say obsession - with other people's histories. As property manager of a spectacular island castle in Cornwall, she's made St Merryn's Mount one of the UK's most popular heritage attractions. While she may have the castle running like clockwork, Miranda hasn't bargained on its sexy owner returning to claim his birthright.

Dark, handsome and with a rakish reputation,  Jago, the Earl of St Merryn, not only looks like a pirate but is intent on flogging the Mount to a soulless leisure corporation. Miranda faces the battle of her life as she tries to persuade him to face up to his past and continue the St Merryn dynasty. But Jago has his own reasons for jumping ship and when he throws down the gauntlet to Miranda, she's forced to delve into painful memories she'd much rather keep hidden . . .


Review:
Miranda had a difficult childhood with a young, unstable mother. She left home at a young age and managed to work her way through University. She always loved history and was thrilled to land a job at St Merryn's Mount, eventually working her way up to manager. She is fiercely devoted to the property and it’s people who have become her stability and her people.

Dark, handsome Jago St Merryn has roamed the world and allowed his mother, Lady St Merryn, to oversee the home--or rather castle--management. He suddenly returns home and tells Miranda, in confidence, of his plans to sell the property to a leisure investment corporation. Miranda is distressed at the thought of losing her “home” and the impact it will have on the other workers and estate families. But she is appalled to find herself sexually drawn to Jago even though she doesn’t like what he is doing and she realizes that any relationship is professionally inappropriate and personally a move toward heartbreak.

Meanwhile, a local heartthrob, Theo, has shown interest in Miranda. He and Jago have clear animosity and, although Theo is well respected in the community, it appears that he may be using Miranda to spite Jago.  Miranda is caught between the alleged 'nice guy' who doesn’t stir her senses as much as the alleged 'bad boy' she can’t have.

Miranda and Jago each have painful pasts that they are running from. I really liked how Ms. Ashley slowly revealed their secrets and developed their characters. The romantic triangle with Theo was a little puzzling as his ‘courtship’ was so slow to get started. I suppose that is fitting with it’s ultimate purpose and result, but it didn’t quite fit with the ‘really nice-guy’ image that was being projected for him.

The castle operations and Cornish seaside make for interesting and beautiful backdrops to the characters’ conflicts and emotional struggles. I enjoyed the visual images of the castle, the harbor, ocean and beach scenes – I’d love to visit!  The dialogue is saucy with plenty of British attitude, sexual fantasy and frivolity to make this lively even as it deals with overcoming emotional issues resulting from abandonment and loss.

I have enjoyed Ms. Ashley's light romances from earlier reads. This one seems to have more emotional depth but still has the likeable characters and wonderful settings.  This is a nice blend of fun and emotional romance. I recommend this to readers who enjoy flirty, British style romance especially with the addition of emotional challenges to overcome.


She’d melted like a bloody snowflake on a bonfire. Location 839

A description I liked:


The evening sun shone through the great cleft in the rock, the late rays dappling the green pool with sun sparkles. Location 3178.

I received this title from the Author for an honest review.
Phillipa shared with me:


St Michael's Mount is a real place by the way - an amazing place that inspired the book.
http://www.stmichaelsmount.co.uk/