This is a fine fantasy romance: a damsel in distress, an evil enemy, a knight to the rescue, a bit of magic and conflicted, sweet love.

Queen in Exile
by Donna Hatch 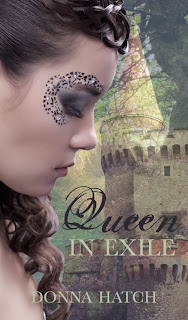 Book Description
Publication Date: January 1, 2011
Rumors of War hang over Princess Jeniah's peaceful country of Arden, a land that shuns both magic and warfare. Following a lifelong dream, Jeniah forms a telepahtic bond with a revered creature called a chayim, who is prophesied to save her kingdom. But when a Darborian knight comes upon Jeniah with her chayim, he sees only a vicious monster about to devour a maiden, and he slays the beast.

Devastated by the loss of her chayim, and fearing that her own magic is evil, Jeniah doubts her destiny. When an enemy invades Arden City, they slaughter the people, storm the castle, and execute the entire royal family except the princess. Rescued by the knight who slew her chayim, Jeniah is now heir to the throne of Arden and the only hope for freeing her people from tyranny.

On the run and hunted by enemy soldiers, Jeniah must place her life and the fate of her kingdom in the hands of this trained killer. Torn between embracing her destiny as queen af Arden, and her love for a mere knight, she must ultimately rely on her magic to save herself and her people from death and tyranny.

Review:
Jeniah is the beautiful, almost ethereal, princess of Arden, a country that embraces peace. Although magic is shunned in her land, Jeniah has a hidden talent of ‘blending’ with her landscape. She is frightened by her own skills until one day she comes upon a chayim in the woods. This is a sacred creature and bonding with one is meant to be powerful and good magic. Just as Jeniah begins the bonding a dark knight swoops in and slays the mystical being.

After years without war the Arden army is limited and defenses are weak.  Now the kingdom must prepare for war. The King brings in a famous Sauraii warrior, Kai, from another realm to train his men. Kai is a fierce warrior and a man of honor. Kai may be fearless in battle but he has suffered the lose of love in the past so he fears loving and losing again.  He is sorry that he did not know the chayim was a good creature and he is sorry he frightened the young woman and brought sadness to her.

Treachery brings an early attack on the castle and many, including the royal family, are slaughtered. Kai feels he has failed to protect the kingdom but he battles his way to Jeniah and gets her out.  Jeniah holds up through the hardships of loss and harsh travel to Kai’s homeland where she can regroup before returning to free her people. Before her plans are put into effect she is kidnaped and dragged back to Arden to face the enemy.

Can Kai rescue Jeniah before she is sacrificed by the evil king?  Can Jeniah reach her power through the chayim to help herself and her people? Can they trust a new ally to help defeat the enemy army?  Enjoy the book to discover these answers.

The writing is fluid and the story has good action and pacing. The hero and heroine are strong characters who have duties and issues that create conflicts to overcome. The attraction and romance between them is conflicted and sweetly magical in its persistence. The Chayim is an interesting creature that enhances the magical aspect of the story.  Donna Hatch has written a creative tale of excitement with danger, repressed love and magical elements. It is engaging reading and I will look for more of her work.


Though this female was small, she had great power, great potential. She possessed duty, courage, and valor uncommon to humans. Location 1888.


Somehow, she had touched the broken pieces of his heart and made them feel again.
He could not slay these demons. Location 2342.

I received this book for review for the publisher, Walnut Springs Press.
The book will be added to my ARC and New Author challenge lists.
Posted by Martha Eskuchen at 6:00 PM