This has been a great listening series. If you like humor, Victorian settings and paranormal characters, I  highly recommend you try this fun series! 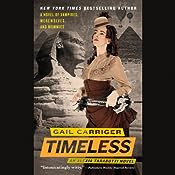 Timeless: The Parasol Protectorate, the Fifth

Publisher's Summary
Alexia Tarabotti, Lady Maccon, has settled into domestic bliss. Of course, being Alexia, such bliss involves integrating werewolves into London High society, living in a vampire's second best closet, and coping with a precocious toddler who is prone to turning supernatural willy-nilly. Even Ivy Tunstell's acting troupe's latest play, disastrous to say the least, cannot put a damper on Alexia's enjoyment of her new London lifestyle.
Until, that is, she receives a summons from Alexandria that cannot be ignored. With husband, child, and Tunstells in tow, Alexia boards a steamer to cross the Mediterranean. But Egypt may hold more mysteries than even the indomitable Lady Maccon can handle. What does the vampire Queen of the Alexandria Hive really want from her? Why is the God-Breaker Plague suddenly expanding? And how has Ivy Tunstell suddenly become the most popular actress in all the British Empire?


Review:
Alexia, the strong minded protagonist, is coping with her ‘interesting’ life. She lives with her werewolf husband, Conall Maccon, the Alpha of the Woolsey pack.  The pair actually reside secretly next door to the pack home.  They live with a flamboyant vampire, Lord Akeldama, who is the adoptive father of Alexia and Conall’s child, Prudence.  This was a compromise to prevent the local (or previously local) vampire Hive from killing the child whom they perceive as a soul sucker.

Prudence does have unusual capabilities that only Alexia can help to control.  When Alexia, a preternatural, touches an immortal supernatural being, such as a werewolf or a vampire, they become only human.  When Prudence, a metanatural, touches them she exchanges form with them usually creating a bit of trouble, if not chaos.

Alexia receives a summons first to visit Countess Nadasdy, the leader of the former London Hive, now living in the country. The Countess delivers an even more important invitation that requests that Alexia and Prudence visit the Queen of the Alexandria Hive, the oldest Vampire. The request cannot be ignored even though it causes trepidation for everyone as they must travel to Egypt which is the known source of the God-Breaker Plague, a plague that steals the supernatural powers of the immortal beings. Soon the family is off on another harrowing, and humorous adventure.

I love the wonderfully distinct characters in this series. There is strength and humor in each. Alexia tries to be prim and proper which is hard for one so adventurous and forthright. Conall is droll and serious as his Scottish background and Alpha duties require of him. Akeldama, a gay Vampire, is completely flamboyant yet everything proper in London society. I love how Akeldama has pet names for Alexia and Prudence... like Buttercup or Daffodil.  Then there is Alexia’s faithful, lifelong servant, Floote.  He was with Alexia’s father when they were in Eqypt and has been Alexia’s protector since she was a child.  He is the quintessentially efficient butler or manservant, yet he has secrets from the times in Egypt that he will not reveal.

There are others too: Madame LeFoux, a member of the secretive Order of Brass Octopus, who (unlike Alexia) is always dressed impeccably--- or would be if she were a man. Biffy, a former Akeldama drone who is struggling to acclimate himself as a fairly new member of the Werewolf pack. Not to mention Ivy Tunstell, Alexia’s actress friend. All of these characters have been developed through the series and add wonderful color to each tale in varying degrees.

Although this book started a bit slowly for me, once it settled into the new adventure I didn’t want to put it down. This is Book 5 and it rounds out the the Parasol Protectorate series, wrapping together some loose ends and mysteries. However, looking at the author’s website reassures me that there will be future books involving Prudence, Alexia’s unusual progeny!

I have listened to all five books in this series and enjoyed them very much. The narrator does a wonderful job conveying the accents and personalities for each character. This allows the nuances of distaste, humor, fear and other emotions to flow through the reading.

This series is a mixture of Victorian, steampunk, adventure, romance and humor. It is just plain fun listening!


This book is from my own Audible Library.
If I were including countries on My Where Are You Reading Challenge this would fit in England and Egypt. I will include this with my Audio Challenge list.
{Watch for a Giveaway from this series soon to be posted in my July-August Blogoversary!}
Posted by Martha Eskuchen at 2:58 PM