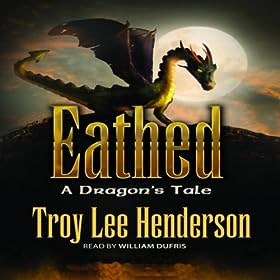 
The last of his kind, Eathed, an ancient dragon, has finally found a place to live out his last days peacefully. He is discovered by three young brothers hiding in a cave near their village. Few villagers believe there really is a dragon, so only an old knight, Sir Allistair Bayne, is sent to seek out the dragon. A battle ensues during which both knight and dragon fall in spectacular fashion. Simon takes pity on Eathed, and an unlikely friendship ensues.


Review:
This is a charming short story.
Eathed is a tired and bedraggled old dragon, the last of his kind. All he wants is peace and quite to rest out his last days. He thinks he has found a quiet spot until three young boys from a nearby village discover his cave.

The boys are frightened and race home to tell their father who takes them to the local authority. The Lord isn’t convinced that they really saw a dragon, but in caution he calls in an old knight who used to fight dragons. It so happens that the knight, Sir Allistair, is the boys’ grandfather. The eldest boy, Simon, talks Sir Allistair into allowing him to go along as his squire. The first visit is only supposed to be investigative but instead a rather disastrous battle ensues. Simon helps his injured grandfather home and comes back to check on the dragon. Simon is stunned when Eathed starts to talk to him and slowly they develop a friendship that pulls the listener in to share.

This gem is just over an hour long and it is completely engaging and entertaining. The story is imaginative and emotionally warm as well as offering a lesson on not stereotyping humans...or dragons. The narration is effective with a deep, resonant voice for the dragon, a young boy’s voice for Simon and an appropriately gruff, elderly voice for Sir Allistair. Drufis manages to convey the emotions of the scenes, whether excitement or sadness, with good tonal control and pacing.

This is the second short audio I have had the pleasure to review for Mind Wings Audio. If you want a short, quality listen I suggest you take a look through their offerings. You do not need an MP3 player to listen to this as you can download it to your computer and enjoy listening through Windows Media Player or other audio player. I am going to share the joy of listening to this delightful story by gifting a download to one lucky commenter.


Thank you to Mind Wings Audio for providing this download through the review program at Audiobook Jukebox.
I will add this to my New Authors and Audio challenge lists.

TO ENTER THIS GIVEAWAY for an MP3 Download:
1. Visit Mind Wings Audio site and tell me a story you might like to listen to. This is required for entry.

* This contest is open WORLDWIDE.
* This contest will close 10 PM (Central) on August 3, 2012.
The winner will be randomly selected from all entries.
WINNER WILL BE ANNOUNCED on August 4.
Winners will have 72 hours to respond by email or the winners form linked in the announcement.
Posted by Martha Eskuchen at 5:30 AM