Audiobook Review: No One Left to Tell by Karen Rose

This is romantic suspense just as I like it: sharp characters, tricky, twisty mystery and sensual romance that faces obstacles.  Karen Rose needs to be on my list of authors to collect for romantic suspense! 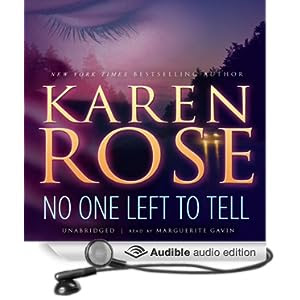 Also available in other formats at Amazon, Barnes and Nobles and other distributors.

Book Description
Publication Date: June 5, 2012
The addictive Karen Rose serves up her most relentless thriller yet.

A woman is dead and her fiancÃ© is serving a life sentence for a murder he didn't commit. Now PI Paige Holden holds the only piece of evidence that could see him freed, and she cannot take it to the police. With the help of disarming state attorney Grayson Smith, Paige is determined to avenge the murdered woman and set an innocent man free. But Paige has only scratched the surface of a cover-up far deadlier than she could ever imagine. A string of mysterious deaths of women with a shared past sets Paige on the trail of a ruthless killer. The problem is, the killer's on her trail too.


Review:
Paige Holden brought herself back from a physical attack a year earlier.  She is strong and feisty and not about to let anything or anyone hold her down. As a fledgling PI, Paige has barely begun investigating accusations of the wrongful incarceration of a man when the man’s wife crashes a car in front of her.  The woman passes a thumb drive of information and tells Paige that police were chasing her just before the sniper’s final bullet whizzes past Paige’s head.  That gets this book off to a running start that doesn’t slow down until the end.

Paige is afraid to take the information to the police but knows that holding it can be trouble.  That happened to her boss, Clay, who has had his own run ins with local cops.  Paige decides to take the information to the state attorney who prosecuted the innocent man. Although she isn’t positive she can trust Grayson Smith, she takes the plunge after he rescues her from an attacker.

It is quickly clear that someone is trying to stop Paige and Grayson from investigating the case any further. The framed man in prison is only the tip of the iceberg as Paige and Grayson discover a trail of dead bodies.  Paige and Grayson begin to see a pattern as they connect deaths over many years to a charity program sponsored by a wealthy and influential family. Which of the family members might be desperate enough to protect the family by killing witnesses until there is ‘no one left to tell’? And which law officials are part of the corruption?

This is fast paced action, full of blackmail, corruption and murders, not to mention attacks and near-misses for the heroine and hero. The clues build on each other creating a twisting mystery pointing at several suspects. When the perpetrators are revealed the confessions seem almost too easy but they work and all the details are neatly and satisfactorily wrapped up.

I liked both Paige and Grayson as strong and wounded characters.  Paige had her past to hide but Grayson has his own secrets keeping him at arms length. Their attraction pulls them together forcing them to face their personal demons. The family members and friends add good character background.

I realized early on that I recognized the narrator from other audio books. At first I wasn’t sure if I liked her voice for all of the characters but I soon appreciated her ability to express the emotions of the scenes whether fear, reluctance, anger or passion.  Further along I felt that the narration enhanced the excitement and intensity of this great suspense read.  This was a longer listen but I didn't find it dragging or boring in any spots. I like how chapters and sections are identified by place and time.

If you enjoy solid romantic suspense I don't think you can go wrong with this book or this author.

I received this from Blackstone Audio through Audiobook Jukebox. Thank you for a great listen!

This book takes place in Baltimore, Maryland for my Where Are You Reading Challenge. I will also include it with my Audio Challenge List.
Posted by Martha Eskuchen at 4:49 PM