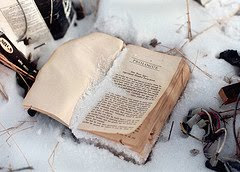 [Picture courtesy of Flikr]
DON'T LEAVE THE BOOKS OUT IN THE COLD!  ha ha!
Here is a new set of books plus those left from pick#1, pick#2, pick#3 and pick #4 and pick #5. Use the links to see the pictures if you want but the lists of the books still available are below!


Remember for the overseas participants I am willing to give a $5.00 book certificate to international winners - Amazon, Barnes & Noble, Borders, TWRP, ClassAct Books, eTreasures, Desert Breeze, etc....you tell me where and I'll set it up. Overseas visitors your comment may indicate your choice of gift card. 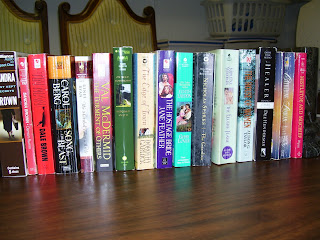 Pick #6
Best Kept Secrets by Sandra Brown - Audio CDs
Demon Rum by Sandra Brown
Tin Man by Dale Brown
Song of the Beast by Carol Berg
The Marshall Takes a Bride by Renee Ryan *PA*
The Torment of Others by Val McDermid
On Bear Mountain by Deborah Smith
The Edge of Town by Dorothy Garlock
The Hostage Bride by Jane Feather
Gypsy Lover by Edith Layton
The Guardian by Nicholas Sparks
The Elusive Flame by Kathleen Woodwiss
The House of Women by Alison G. Taylor
The Healer by Dee Henderson - Audio Tapes
Elusive Love by Catherine Lanigan
Mistletoe and Mischief by Patricia Wynn
Pick#1
Cold Mountain by Charles Frazier
A Jockey's Life by Dick Francis
Nights in Rodanthe by Nicholas Sparks
Circle of Stars by Anna Lee Waldo
Net Force - One is the Lonliest Number by Tom Clancy
Everlasting by Kathleen E. Woodiwiss
Piercing the Darkness by Frank Peritti
A Time to Kill by John Girsham
Tamed by a Laird by Amanda Scott
Jerusalem Vigil by Bodie & Brock Thoene
Never Seduce a Scoundrel by Sabrina Jeffries
Almost Single by Advaita Kala

Pick#2
Love Me Forever by Johanna Lindsey
It Had to be you (the Gossip Girl prequel) by Cecily Von Ziegesar
Breaking Point by Suzanne Brockmann
Lord of a Thousand Nights by Madeline Hunter
On the Run by Iris Johansen
The Crush by Sandra Brown
The Blue Zone by Andrew Gross
Shadows in the Heart - A Jewels of the Quill Halloween Anthology *PA*
Bait by Karen Robards
The Lighthouse by Mary Schramski
It's Always Something by Gilda Radner - Gilda's poignant battle with cancer.

Put Your Dreams First - Handle your [entertainment] business HY[E]B by Thembisa Mshaka
Delivered by Christmas Anthology - Linda Howard, Joan Hohl andSandra Steffen
The Woman Next Door by Barbara Delinsky
Until Prove Guilty by J.A. Jance
One Night with a Prince by Sabrina Jeffries
Maverick Wild by Stacey Kane
Red Fire by Dierdre Knight
Cloud Nine by LuAnn Rice
The Beach House by Mary Alice Monroe
One Eye Closed by Karen Whiddon
Under the Mistletoe by Mary Balogh
The Bartered Bride by Mary Jo Putney
Isle of Palms by Dorothea Benton Frank
Payback by R.I. Kaiser
The Angels of Darkness by Caleb Carr
Dream in Color - How the Sanchez Sisters are Making History in Congress

Honeymoon by James Patterson
Talking God by Tony Kellerman
Twelve Acres by Barbara Delinsky
Black Ice by Anne Stuart
Everything to Gain by Barbara Taylor Bradford
CORRECTION:  This was not The Last of The Mohicans based on the Novel by James Fenimore Cooper - although I do have that;  The book in the group is The Sixth Sense.
A book my son left me when he went off to the service!)
A Cowboys Redemption by Jeanie Watt (PA)
Three Weeks in Paris by Barbara Taylor Bradford
The Shop on Blossom Street by Debbie Macomber
Tripwire by Lee Child
The Shadow by Shelley Munro (PA)
Children of the Wild by Orson Scott Card
Until Death Do Us Part by Christine Mcquire
Warning Signs by Stephen White
The Forgotten by Faye Kellerman
Swear by the Moon by Shirley Busbee
Montana Bride by Barbara Clark (A)