I won Death of a Valentine by M.C. Beaton from Mom's Mutterings.

Thank you Pam and Hachette! 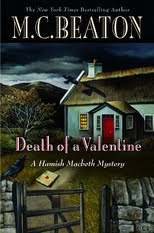 Amazing news has spread across the Scottish countryside. The most famous of highland bachelors, police sergeant Hamish Macbeth, may actually marry at last. The entire adores Macbeth's bride-to-be. Josie McSween is Hamish's new constable, and she is a pretty little thing, with glossy brown hair and big brown eyes. The local folk think that Josie is quite a catch, but Hamish couldn't be more miserable.

The wedding wouldn't be happening if it weren't for the murder of a beautiful woman in a nearby village. After the gorgeous woman receives a deadly Valentine's Day gift, Hamish and Josie take on the case. However, they soon discover that the list of the victim's admirers is endless. The case confirms Hamish's belief that love is extremely dangerous, but he still can't avoid the events that lead up to his celebrated engagement. 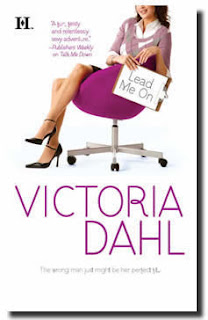 I also won Lead Me On by Victoria Dahl on a Tweet Contest!

The wrong man just might be her perfect fit... Primal attraction is a big red flag to prim and proper office manager, Jane Morgan. After a rough childhood with a mother who liked her men in prison jumpsuit orange, Jane changed her name, her look and her taste for bad boys. So why is she lusting for William Chase with his tattoo-covered biceps, steel-toed boots and unadulterated sex appeal?

The man blows things up for a living!

She gives herself one explosive, fantasy-filled night with Chase. The next day, it’s back to plain Jane and safe men.But when her beloved brother becomes a murder suspect, and her lawyer ex-boyfriend won’t help, Jane turns to Chase. And she discovers a man who’s been around the block knows a thing or two about uncovering all kinds of truths.

Posted by Martha Eskuchen at 2:45 PM