I only received one book that I "won" this past week. But I picked up some bargains and borrowed some audios!

I got the book Forgotten Promises by Denise Skelton form AuthorIsland's December Goodie Box Sponsor.  Along with the book I got a large boxful of swag - bookmarks, pens etc. (Winners of books from my blog picks can look to get some extra bookmarks and things!)  I had been interested in this book for sometime and thought getting it with the swag package was a fun way to get it!

Thank you Denise and DeNita! 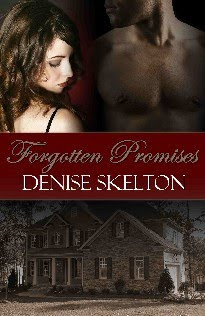 Product Description
True Love Comes Along Once in a Lifetime. That s what Detective Holly Lawson James believed. Her husband and co-worker Edmond was everything a woman could want in a man and a partner; strong, warm and romantic, he filled her life and her heart with passion and joy -until a police sting went terribly wrong and abruptly took him from her and their little girl, Abby. On that day her life changed forever. Now five years later Holly has grown accustomed to being alone, a state that suits her perfectly well, because she s sure that true love comes along only once in a lifetime. Despite promising his wife otherwise, Tyler Green knew he would never find love again. He had watched powerlessly as cancer ravaged his beautiful Felicia. Day by day, moment by moment, the illness, like a thief, dragged her closer toward death and tore away big chunks of his heart. When it was finally over he was left empty and cold, but it doesn't matter to Tyler because he s sure that true love will never head his way again. Still, love has a way of getting through to the stoniest of hearts and all it takes is one mischievous little girl and an unlikely meddling angel to prove them both wrong. But there is danger lurking in the shadows of their new beginning and one person s obsession may well cause Holly to lose the most important thing in her life. Her daughter!

Here are three CD books I borrowed from a clubhouse at property we own: 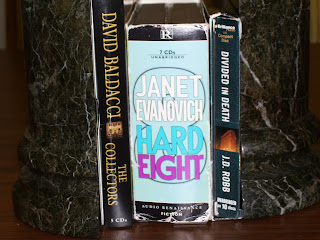 I am participating in the Stephanie Plum Challenge so Hard Eight will be for that. Of course I still have books 4-7 to read first!  [See note below the second picture for more about that.]
Since I really liked Survivor in Death CD Audio so much I picked up the Divided in Death one to read soon.

Also I got lucky and stumbled upon these J.D. Robb books at a thrift store: 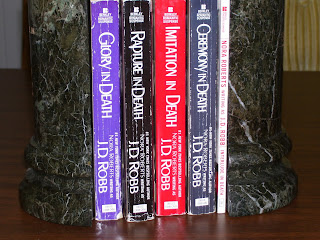 I have two more books at home so now I have a good start on the 20 or so books in this series - oops just looked at Audible to pick up book 1 and they are on book #36! Well that could take a year or two to read - maybe a two year challenge?! Anyway - I purchased Naked in Death - the first in the series and Four to Score, book #4 of the Stephanie Plum series, with my Audible credits.  I have the print book Four to Score but I think the Audible will get me reading it faster.  I have to check with J. Kaye cause we were going to try to do a Twitter read togehter on that one and might start this month!
Posted by Martha Eskuchen at 1:36 PM