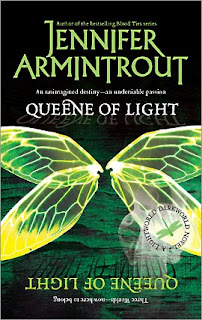 
Blurb:  An unimagined destiny an undeniable passion.
In a time not long from now, the veil between fantasy and reality is ripped asunder—creatures of myth and fairy tale spill into the mortal world. Enchanted yet horrified, humans force the magical beings Underground, to colonize the sewers and abandoned subway tunnels beneath their glittering cities.

But even magic folk cannot dwell in harmony, and soon two Worlds emerge: the Lightworld, home to faeries, dragons and dwarves; and the Darkworld, where vampires, werewolves, angels and demons lurk

Now, in the dank and shadowy place between Lightworld and Darkworld, a transformation is about to begin…

Ayla, a half faery, half human assassin, is stalked by Malachi, a Death Angel tasked with harvesting mortal souls. They clash. Immortality evaporates, forging a bond neither may survive. And in the face of unbridled ambitions and untested loyalties, an ominous prophecy is revealed that will shake the Worlds.

Review:  A unique fantasy setting and a very interesting plot make this an engaging read.

Ayla had a rough childhood growing up on the streets without the love of family or friends.  She is primarily a warrior, often sent on assignment into the Darkworld.  When she is not fighting Ayla is looking for a way to survive as best she can in a very harsh and difficult world.  Her mentor, who is the Queene’s brother, Garret, appears to cherish Ayla but as the story goes on you realize he has a nefarious reason to want her as his mate.

Malachi is a Death Angel who has lost his immortality as a result of his first encounter with Ayla.  Now he is abandoned and alone in Darkworld.  He sets out to kill the assassin who caused his fall.  Ayla and Malachi should want to kill each other on sight, but instead they are drawn by an attraction that neither understands!

I really got hooked into this story right away.  I enjoyed the unique world and the various characters described by the author.  I thought each of the primary characters in the story was defined with uniqueness and developed through his or her behavior.  There was action from the beginning that pulled me in and I felt the story moved along with a good tension. There were times when I just did not want to put the book down!  As the story approached the end I realized that this wasn’t going to finish and there must be a sequel.  I was a little disappointed because I was anxious to see what happened and the end of this book was weakened as the fate of the protagonists, and the world, was left up in the air.

I got the sense the author may have been trying to present a deeper message but I wasn’t in the mood to ponder it out!  Besides, I don’t always need a message to enjoy the read and I did enjoy this.  I will want to read the next book to uncover where the prophecy is headed! Maybe then I'll think on the message.

Posted by Martha Eskuchen at 10:37 PM