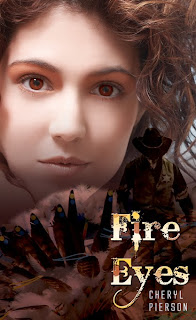 
Blurb:  Beaten and wounded by a band of sadistic renegades that rules the borderlands of Indian Territory, U.S. Marshal Kaed Turner understands what the inevitable outcome will be for him: death. But Fate and a war party of Choctaw Indians intervene, delivering him instead to a beautiful angel with the skill to heal him. Jessica Monroe has already lost a husband and a brother to the outlaws who tortured Marshal Turner. As the rugged lawman lies bleeding on her bed, she faces a difficult decision. Can she afford to gamble with her heart one last time? For when Kaed recovers, he is sworn to join the other Territorial Peace Officers in their battle to wipe out the renegade gang once and for all. When vengeance is done, will Kaed keep riding? Or will he return to claim his future with the beautiful woman the Choctaw call "Fire Eyes?"

Review:  This story jumps into the heat of action and moves into a very strong romance!

Jessica is a really lovely character.  She has suffered but is brave, compassionate, patient and willing to help others.  The Choctaws call her “Fire Eyes” for the strength of determination and courage they see in her eyes!  She may be inwardly frightened of the Indians, but she is not going to show her fear but instead stands with her chin up and her eyes blazing.  Now they have brought this very handsome, independent and nearly dead Marshall Kaed to her, expecting her to keep him alive. She wants to heal him but doesn't want to lose her heart to a man she knows will leave.

Kaed is rugged, smart and determined to get the bad guys.  He was partially raised by the Choctaws so he knows them as family and friends.  But he doesn’t fit in their world any more than he fits in the world of the settled and refined Whiteman.  Kaed is an independent roamer, not the type to settle down.  Having to stay for some time to heal with a beautiful angel and a sweet baby girl puts some dangerous thoughts in his head.  He doesn’t want to commit to staying but he sure finds Jessica hard to resist and what will happen to her if he leaves?

I really like the background that the author blends into the story to show us the history and nature of the characters.  I had a good understanding of the actions of the characters because I learned a bit of what makes them tick.  This applies to the very nasty villain, Fallon, the other Marshals and even Standing Bear, the Choctaw chief who is Kaed’s Indian “father.”

The story jumps right into some strong action.  Then there is the touching development of the relationship between Jessi and Kaed that gives us a lot of the character background.  The story returns to the marshals trying to save two more young girls kidnapped by Fallon and his Brigade.  The plot is action filled with good guys chasing the bad guys and loved ones in danger!

There is some rough language which fits with the rough cowboys and some time period appropriate violence.  The love making is steamy but very loving.  The true story here for me is how the hero and heroine need each other and how Kaed, particularly, reaches his decision to commit!  A very enjoyable read.  (And a beautiful cover too!)

This is my Tuesday R&R review at SaSR.

Don't forget to enter the Giveaway for Ms. Pierson's books and comment here for an extra entry!

Posted by Martha Eskuchen at 7:30 AM