Review of I Can See You by Karen Rose, Audio CD

Title: I Can See You Audio CD 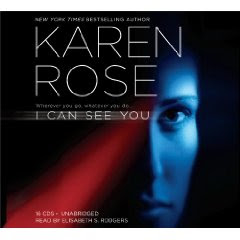 Blurb: Eve Wilson was the victim of the villain in Don’t Tell, an assault which resulted in disfiguring injury. After the incident, Eve retreated into the virtual realm, seeking refuge from the public eye. Now, with the help of a surgeon, her face is mostly restored and she has returned to the real world. Now a graduate student, her goal is to research the use of the virtual world as therapy to improve self-esteem. But when a string of suspicious suicides connected to her Internet activities leads homicide detective Noah Webster to her door, Eve is forced back into an intoxicating world of Web sites, alternate identities, and secret passions. A world where her experience and expertise are key … and where she becomes a player in a deadly game, trapped in the fight of her life.

Review: This is a gripping suspense and wonderfully sensual romance between two injured but determined souls.

Eve is a very strong, brave young woman – a survivor fighting her way back to life in the “real” world. She has finally come out of hiding where she has been recovering from her own physical and mental injuries. Just as she is making progress and pursing her graduate studies she becomes aware of murders that link back to the virtual study she is in charge of.
Noah has his own past demons that he is struggling with. At first he tries to resist the pull he feels towards Eve but finally he decides that she is worth risking the possible pain involved with a new intimate relationship. But can he convince Eve to really step out and live a full live instead of a half, safe existence?

Meanwhile, Eve is trying to follow virtual clues for the killer and providing the only leads the special Detective “Hat force” have. That puts her at the point of danger! If Noah wants to have any relationship with Eve he is going to have to keep her alive first!

Although I suspected who the killer was, there were several suspects and two avenues of threats going on that kept the suspense high throughout this book. It was a bit long but I would be concerned that clues, or tension or the nuances of the struggling relationship between Eve and Noah might be lost in an abridged version. The narrator did an excellent job with the various voices and personalities that were portrayed.

This had all the elements I look for in a really top notch romantic suspense – lots of mystery wound in with tortured characters and sensual conflict! I have not read this author before but based on this book I will look forward to reading more of her books!

Posted by Martha Eskuchen at 5:45 PM