This is a good zombie survivors' story that can be read outside of the series.
#FRATERFEST-4
Dark of Night
A Joe Ledger Novella
By: Jonathan Maberry, Rachael Lavin
Narrated by: Ray Porter 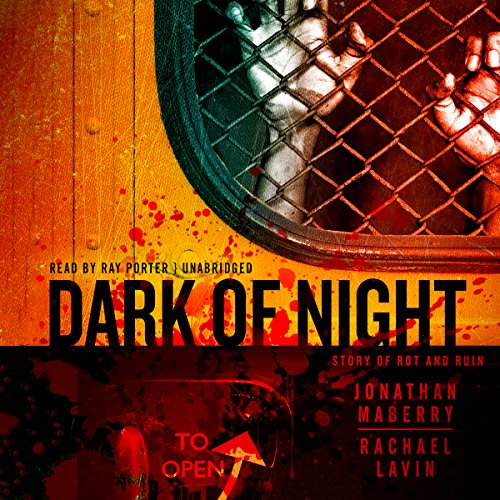 
Publisher's Summary
The dead rose. We fell.
The survivors are trapped in a world of monsters who prey on the helpless. Some of them are zombies...but they are not the only predators who feed on pain and suffering.
Dark of Night is a story of worlds in collision. Three heroes who have survived the apocalypse are in a deadly race to save a busload of children from ravenous zombies and ruthless human scavengers.
This brand new novella brings together three of New York Times best-selling author Jonathan Maberry's award-winning series. Captain Joe Ledger (Patient Zero and Code Zero), Officer Desdemona Fox (Dead of Night and Fall of Night), and Rachael Elle (Bits & Pieces) are caught between an endless wave of the living dead and an army of corrupt men who want to enslave the last human survivors.
©2016 Jonathan Maberry and Rachael Lavin (P)2016 Blackstone Audio, Inc.

Review:
Many years ago the zombie virus started taking over the world. The rare survivors are still struggling to find safe refuge.

Officer Dez Fox is struggling to get a busload of children to a safe camp under control of the National Guard. Then they see the dead passing the bus and realize that these dead are wearing National Guard uniforms. Fox will continue to do whatever it takes to protect these young survivors.

Meanwhile, Rachael Elle is a young woman who has managed to survive the zombie apocalypse in cosplay or LARP gear, fighting the dead “Orcs”. She stumbles upon the bus after Dez has gone out to scout and ends up leading the children by harnessing their superhero inner voices.

Joe Ledger is a career military man who sought to take down Patient Zero. Although he couldn’t stop the virus, he is a legendary warrior against the dead, traveling with the help of a smart warning and killing dog, Captain Joe and Baskerville stumble on the scene and is quick to step into the fray. First he saves a young girl from horrible NKK (New Klux Klan) bad actors. Then he proceeds to fight both enemies, the dead and living, to help the girls save the children.

I’ve read the prequel to this series, so I am aware of the beginnings of Joe Ledger facing the zombie hoard. I enjoyed the startling meeting between Joe and Dez and I appreciated the determination of all three characters to fight the dead and help other survivors. I had not met the two female characters and I will definitely backtrack to find their stories. There is plenty of fast paced action. However, the story is really only about two and a half hours as there is a second, totally unrelated story written by someone else that is tagged on. I am glad I got to listen to this and I will be reading/listening to more in the series. I recommend this to fans of battle action and some snarky character interaction.

Audio Notes: Ray Porter is an excellent narrator. He does such a good job with action and distinct character voices. I would feel comfortable searching out books narrated by Porter, and I could likely enjoy those stories. His narration enhances the story for me.