This is tough reading with a little bit of philosophizing.
Deathbeast
By: David Gerrold
Narrated by: Andy Caploe 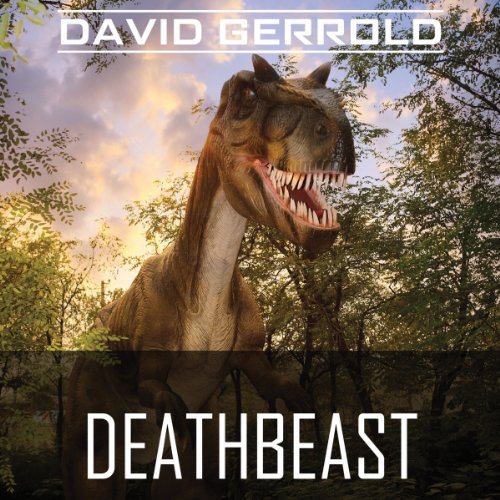 Publisher's Summary
Timebeam to danger
Six hunters and two official guides are going on the trip of their lifetime. Their destination? Earth as it was 100 million years ago, long before human dominion, when the great hot-blooded dinosaurs ruled supreme.
Each of the time travelers has a different motive. Some are on the strange safari for pay. Others are taking a psychological and sexual holiday from civilization. There are women who wanted to show themselves the equal of men - and men out to test and prove their manhood.
But whatever their drives and desires, their strengths and weaknesses, the ultimate horror awaits them...deathbeast.
©1978, 1999, 2014 David Gerrold (P)2014 Audible Inc.


Review:
Of course, it must be exciting to travel to prehistoric times and the ultimate challenge to hunt dinosaurs. Not just any dinosaur, but, if the group is lucky, the king of dinosaurs, the T Rex. The official guides are supposed to be in charge and try to discourage the hunters from specifically hunting the T Rex. The chartered event is of to a rough start when they land on an large predator who wasn't spotted on the scanners. After trampling a lot of the specialized equipment, the safari sets out in search of more predators. Fortunately for the macho, enhanced warrior leader of the hunters, Ethab, the group stumbles upon a T Rex the first night. When one of his friends falls prey and a female hunter goes catatonic, Ethab becomes obsessed (think Moby Dick) to take down the ‘Deathbeast’.

There is plenty of hunting action, if rather ineffective. Humans hunt, become prey and get eaten. The head guide is professional but soon loses control. The second guide has a snarky wit trying to cover his insecurities. The hunting team members have different motives and less sense than you would think experienced hunters should have. Each member of the hunting crew has their own character foibles and flaws. There is a side thread of sexual undertone that, in my opinion, diminishes the story. As the number of the group dwindle, the survivors have the opportunity to ponder who is the greatest beast as they philosophize on life.

The story is dark and moves from alarming to grim with some roll-your-eyes scenes sprinkled in. Although it was different from what I expected, I did find the prehistoric world and detailed creature descriptions quite interesting. I didn’t realize that this was originally released in 1978 so the descriptions were based on information available then. Since this is a vintage sci fi, I am glad I got to listen to it for free. Fans of classic sci fi might want to give this a try.

Audio Notes: Andy Caploe does a good job with the narration. He provides distinct voices and portrays the gruesomeness of the deaths. I am glad I was able to do a quick listen.