This a nice, light, easy read.

A Nanny For Christmas: A Harper's Corner Series Novella
by Christina George 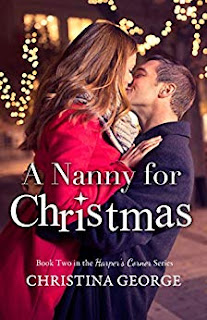 Willa O’Rourke knows the true story, the story that doesn’t sell magazines.
In less than 8 hours Willa went from being a behind-the-scenes nanny for one of the hottest A-list celebrity couples, to having her picture splashed all over every magazine in the country.
Caught in the arms of her sexy employer, Johnny Blaze.
No one cares that Johnny hit on her, and she repeatedly told him no.
The world thinks Willa O’Rourke is more interesting as the slutty, home-wrecking, opportunistic nanny. She even has a hashtag trending on Twitter. #dirtynanny
Humiliated and desperate to get away from the harsh eyes of Hollywood, she decides to take a short break from her suddenly not so glamorous life and head home for the holidays.
But a quiet Christmas to recoup before heading back to LA wasn’t in the cards.
She immediately runs into Jack, her seriously hot, fireman ex-boyfriend.
Despite Willa’s attempts to keep a low profile, she and Jack are thrown together for a Christmas charity project -- making her wonder if she’s meant for a simpler life in Harper’s Corner after all.


Review:
Willa left behind her high school and college boyfriend to follow her dream of becoming an actress. She ended up working as a nanny for a celebrity couple, having to fend off advances by her sexy boss. After being caught in a picture that looks bad, she has returned home in disgrace with the scandal of the #dirtynanny.

Willa can barely hold her head up but fortunately her brother and friends are willing to welcome her home. She doesn’t expect any warm welcome from her ex-boyfriend, Jack, a handsome firefighter.

Jack was devastated when Willa left although he loved her enough to let her go pursue her dream. He’s never really gotten over her but he doesn’t plan to get hurt again. Still, the attraction between them picks up immediately and he’ll have to decide if its worth sharing passion on a short basis even if she might leave again.

The characters are likeable and the chemistry is strong. I liked the Christmas elements that had Willa and Jack helping to put together Christmas decorations and activities, including a presentation of The Christmas Carol, for an orphanage. The other town characters are fun and add to the story. The second chance isn’t a slam dunk but is fraught with tension which is engaging.

I enjoyed another book (The Publicist) by Ms. George which was a bit more intense. This is an easy read that sets the stage for a nice series. I would recommend this to readers who enjoy second chance romance and Christmas settings.


Source: Author Marketing Experts for review. This adds to my 2018 Alphabet Challenge.
Posted by Martha Eskuchen at 5:30 AM