I found this unusual and interesting.
Nation
By: Terry Pratchett
Narrated by: Stephen Briggs 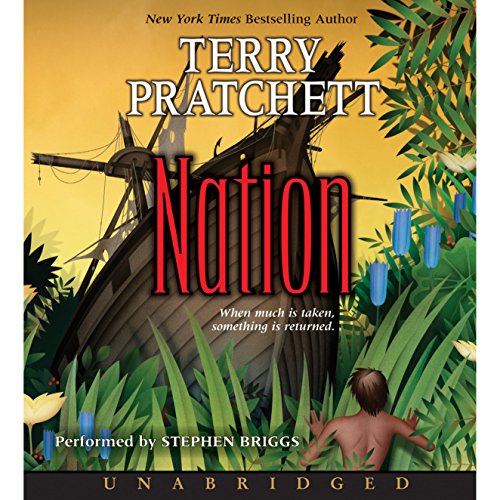 Publisher's Summary
The sea has taken everything.
Thirteen-year-old Mau is the only one left after a giant wave sweeps his island village away. But when much is taken, something is returned, and somewhere in the jungle, Daphne - a girl from the other side of the globe - is the sole survivor of a ship destroyed by the same wave.
Together, the two confront the aftermath of catastrophe. And slowly, other refugees arrive - children without parents, mothers without babies, husbands without wives - all of them hungry and all of them frightened. As Mau and Daphne struggle to keep the small band safe and fed, they defy ancestral spirits, challenge death himself, and uncover a long-hidden secret that literally turns the world upside down....
Internationally revered storyteller Terry Pratchett presents a breathtaking adventure of survival and discovery, and of the courage required to forge new beliefs.
©2008 Terry and Lyn Pratchett (P)2008 HarperCollins Publishers


Review:
Mau is a young boy of The Nation, a tribe on a distant, island which rarely sees the white people from the main continents. Mau has just completed the canoe test which will move him into manhood when he returns to the main island. However, the island has just been stripped by a mighty tidal wave. When Mau returns he finds no other survivors and is faced with the terrible task of moving all of the dead to the waves for a proper burial.

Mau discovers a young white girl, a “ghost”, who is the sole survivor of a British ship wreck. The two are from totally different societies and initially cannot understand each other’s language. They begin with hand signals and drawings. After a few days more survivors drift ashore and one of the Nation has been exposed to the English so he helps breach the language difficulties.

Mau hears the voices of “the Grandfathers” in his head as he goes from questioning the Nation’s Gods to raging and fighting them. As the survivors slowly rebuild they must grapple with the concepts of nation, religion, culture, personal responsibilities and, of course, good and evil.

Daphne, the young girl, shows Mau attributes of bravery and kindness. She helps other survivors and is willing to learn ways of the Nation quickly. A surviving elder/priest objects to Mau challenging the Gods and tries to keep hidden old secrets of the anchor stones which represent the Gods. Mau and Daphne won’t let him stop them from searching and learning the history of the stones.

This is a fantasy which appears to be aimed at a younger audience. It deals with social and religious issues which I think would be difficult for young people to understand unless they read this with an adult. I believe it would be appropriate for education value to young adults.

There are many raving reviews for this book but I just didn’t have that strong response. Perhaps I was seeking simple entertainment and not a philosophical fantasy. I enjoyed the story as it develops although I found it slow moving at times. I did like how Mau and Daphne grew in their understandings of the worlds nearby and far away. I found it interesting how the author deftly handled their sweet friendship in light of the divides of their worlds.

I have had this on my Audible shelf for a long time and it is the first book by Prachett that I have read/listened to. The writing was strikingly beautiful and rich which added to my enjoyment. I would recommend this to readers who enjoy a philosophical discussion in a coming of age story.

Audio Notes: Stephen Briggs provides excellent narration for the story. He gives personality and fitting voices to each of the characters. His melodious voice enhanced the reading for me.

Posted by Martha Eskuchen at 11:07 PM