This is a fun and engaging space sci fi.
All These Worlds
Bobiverse, Book 3
By: Dennis E. Taylor
Narrated by: Ray Porter 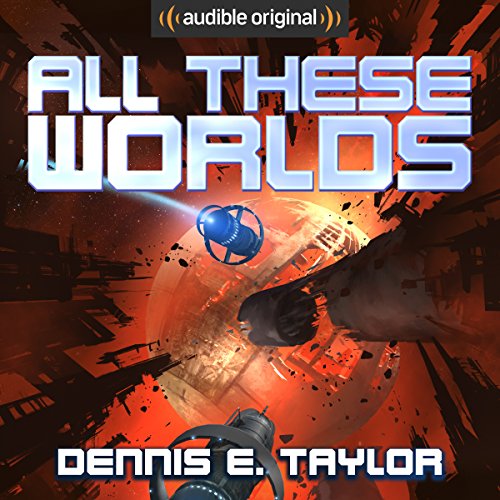 Publisher's Summary
The epic and highly anticipated conclusion to the listener-favorite series that had countless Audible listeners (and employees) hooked from the very first Bob—featuring, as always, a flawless performance from the inimitable Ray Porter.
Being a sentient spaceship really should be more fun. But after spreading out through space for almost a century, Bob and his clones just can't stay out of trouble.
They've created enough colonies so humanity shouldn't go extinct. But political squabbles have a bad habit of dying hard, and the Brazilian probes are still trying to take out the competition. And the Bobs have picked a fight with an older, more powerful species with a large appetite and a short temper.
Still stinging from getting their collective butts kicked in their first encounter with the Others, the Bobs now face the prospect of a decisive final battle to defend Earth and its colonies. But the Bobs are less disciplined than a herd of cats, and some of the younger copies are more concerned with their own local problems than defeating the Others.
Yet salvation may come from an unlikely source. A couple of eighth-generation Bobs have found something out in deep space. All it will take to save the Earth and perhaps all of humanity is for them to get it to Sol - unless the Others arrive first.
©2017 Dennis E. Taylor (P)2017 Audible, Inc.


Review:
This is a satisfying conclusion of a fun series. Bob was a human who woke up to find his brain had been used to create a sentient AI spaceship. Bob and his many clones have spread throughout the universe. They have helped develop new worlds for human colonies and even helped with alien species on their own planets and as refuges to a new planet to survive.

The author follows several threads on different planets. Many of the Bobs have created Android bodies to interact with the colonists or other aliens. The original Bob is living, undercover, with his aging Deltan friend Archimedes. Howard returns to comfort Bridgette when her husband dies and they renew a close friendship over the objection of her children. Marcus joins the rebels in Poseidon.

While the younger Bobs worry about their new colonies, the older ones worry how they can save humans from decimation by the Others. The Others have already committed genocide of several worlds. The Bobs fought them but failed to save the planet where the Pavs lived. Now there is concern that the Others will attack the earth where millions of survivors are still waiting to be paid.

This book is a little calmer than the first too but still engaging. There is a good balance of humor, danger and even family drama. I enjoyed the interesting dynamics of the AIs trying to balance the extent of their involvement with humans and experiencing loss as long-time companions age and die. The fantasy doesn’t require a lot of hard thought but provides light, fun entertainment.
I recommend this to readers who enjoy a lighter sci fi fantasy.

Audio Notes: Ray Porter is a stellar narrator. He provides many varied voices and conveys equally well the somber and snarky characters. His narration definitely enhances the enjoyment for me.