This reminded me how much I enjoy forensic mysteries.
The Vanished Man
A Lincoln Rhyme Novel
By: Jeffery Deaver
Narrated by: Adam Grupper 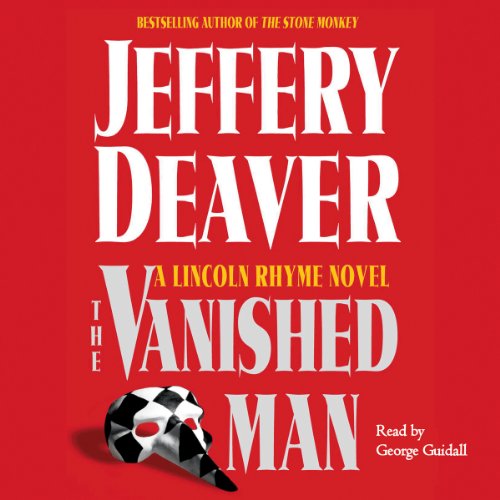 Publisher's Summary
It begins at the prestigious music school in New York City. A killer flees the scene of a homicide and locks himself in a classroom. Within minutes, the police have him surrounded. When the scream rings out, followed by a gunshot, they break down the door. The room is empty.
Lincoln Rhyme and Amelia Sachs are brought in to help with the high-profile investigation. For the ambitious Sachs, solving the case could earn her a promotion. For the quadriplegic Rhyme, it means relying on his protégé to ferret out the master illusionist they've dubbed "the conjurer", who baits them with gruesome murders that become more diabolical with each fresh crime. As the fatalities rise and the minutes tick down, Rhyme and Sachs must move beyond the smoke and mirrors to prevent a terrifying act of vengeance that could become the greatest vanishing act of all.
©2003 Jeffrey Deaver (P)2003 Simon & Schuster, Inc. All Rights Reserved


Review:
Two young officers are first on scene to a murder of a young woman. A security guard called them into a supposedly closed music school where they stumble upon a man hovering over a body. They try to challenge the perp, but he slips out of the room. The officers hear him in the other room as they plan how to trap him. However, when they enter the room he has vanished. Lincoln Rhyme, the bedridden quadriplegic, former detective and his right-hand investigator, Amelia Sachs, are brought in on the investigation. The initial clues lead them to a magic shop where they encounter a young woman who has been studying and practicing the arts of illusion.

Another murder occurs, and it becomes clear that the murderer is using historic illusion tricks and settings. Rhyme and Amelia make progress due in big part to the aid of their budding illusionist. The murderer feels that Lincoln is a threat and he confronts him in a vulnerable situation. Now the case has become personal and Rhyme and Amelia must trap the murderer before Rhyme becomes a victim and before the murderer kills a crowd which they suspect he is going after.

I found the settings and history very interesting. The illusions and slight of hand add to the good suspense. The 'vanished man' continues to be a chameleon, one step ahead of the police. It has been a while since I read (listened) to a forensic mystery and this definitely reminded me why I enjoy them so much. I recommend this to readers who enjoy this genre.

Audio Notes: I was pleased with the narration by Adam Grupper. He adds distinct voices and excellent pausing and energy. I usually listen to unabridged versions, but this shorter version seemed just right for my enjoyment.


Source: 2004 Audible Credit Purchase. This qualifies for 2018TBR, Audiobook and a "V" title for Alphabet Challenge.
Posted by Martha Eskuchen at 10:49 PM