Audible Book Review: Leader of the Pack by David Rosefelt

I always enjoy the mystery and the self-deprecating humor of this series.
Leader of the Pack
By: David Rosenfelt
Narrated by: Grover Gardner 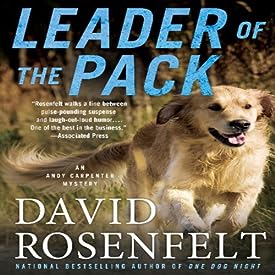 Publisher's Summary
Over the course of his legal career, Andy Carpenter has lost a few cases. But that doesn't mean he forgets his clients. Andy has always been convinced that Joey Desimone, a man convicted of murder nine years ago, was innocent and believes that Joey's family's connections to organized crime played a pivotal role in his conviction. While there isn't much Andy can do for him while he serves out his prison sentence, Joey suggests that he check up on Joey's elderly uncle. He'd rather not, but as a favor to Joey, Andy agrees to take his dog, Tara, on a few visits.
The old man's memory is going, but when Andy tries to explain why he's there, it jogs something in the man's mind, and his comments leave Andy wondering if Uncle Nick is confused, or if he just might hold the key to Joey's freedom after all this time. Andy grabs on to this thread of possibility and follows it into a world where the oath of silence is stronger than blood ties, and where people will do anything to make sure their secrets are kept.
©2012 David Rosenfelt (P)2012 Listen & Live Audio, Inc.


Review:
Andy Carpenter is a criminal defense lawyer who gets to be very selective about his cases since he is independently wealthy. One of his previous clients, Joey Desimone, is in jail for killing his former lover and her husband. Joey insists he didn’t commit the murder but was the prime suspect due to his family ties with organized crime. Joey asks Andy to visit his elderly uncle. Andy takes his lovely golden retriever, Tara, along to visit. Uncle Nick seems to have lost touch with reality, but something disturbs him and he shares what seems to be a random statement. This sets Andy off searching clues even as deaths begin to occur around the investigation. The plot expands to a bigger issue with a few good twists before the conclusion.

I always enjoy the good mystery crafted by Rosenfelt and the self-deprecating humor of his quirky character Andy. Each of the main characters, Andy, his love, Lori, and his friends, Pete and Sam, are portrayed with very real-to life traits. There is almost always a connection with an organized crime family.  Tara and the rescue foundation he founded with a friend are a steady part of Andy's life even if they are not central to the plot. Each story is self-contained and entertaining. I recommend this story and the series to those who enjoy mystery with natural life humor.

Audio Notes: Grover Gardner does a great job narrating. He is the voice for Andy. The combination of story and presentation makes these easy, enjoyable listens.

Posted by Martha Eskuchen at 10:16 PM