#NetGalley Book Review: Queendom of the Seven Lakes (Legends of the Godskissed Continent) by A B Endacott

I liked this engaging fantasy adventure. 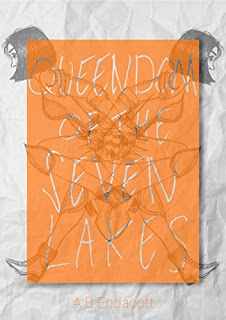 “Your Majesty, I take life. I am not certain that my skills actually extend to preserving it.”
There are always those who are willing to pay for someone else’s death. Having grown up amongst the Family of Assassins, ELEN-AI knows well the prices people are willing to pay to see their enemies fall quickly, quietly, and discreetly. When she is asked to preserve life rather than take it, she is surprised. Upon hearing that her charge is the Queen’s only child GIDYON, who is secretly being groomed to succeed his mother, she is horrified. To ensure political stability, no man has ever sat on the throne of the Queendom of the Seven Lakes. Yet one does not easily refuse a Queen, and so reluctantly, Elen-ai accepts the contract.
Her fears only deepen upon meeting the sixteen-year-old Prince Gidyon, who treats her as no better than a petty murderer. However, following an attack on his life, Elen-ai is forced to admit that the danger of leaving this boy-prince alone may be even worse than leaving him to his own devices. Elen-ai reluctantly accompanies Gidyon across the country to identify those within the seven most powerful families who are responsible for the attempt on the Prince’s life.
Somewhere in their travels from the calm waters of Lake Tak to the looming cliffs above Lake Bertak, the two form an unlikely yet profound friendship, and Elen-ai begins to see that Gidyon has the makings of a great ruler within him. As they meet with the families of power, it becomes increasingly clear that secrets and power games run far deeper throughout the Queendom of the Seven Lakes than either of them ever suspected.


Review:
Elen-Ai is a member of the Family of Assassins. Elen-Ai has been raised by a community that teaches their trade and craft from very young age. She is a young adult who practices hard to keep her skills sharp. She is surprised when she is hired by the Queen, not as an assassin, but as a guard to the Queen’s only child, her teenaged son. The Queendom is supposed to pass through the female line but she is about to announce that she will pass her position to Prince Gidyon. This is likely to cause a stir and she fears that rival families will seek to kill the boy.

Gidyon resents being baby-sat by a guard almost as much as Elen-Ai resents having to baby sit. But there are rumors and those who could be a threat. Both Gidyon and Elen-Ai are surprised and become cautious when they are attacked on a journey to the country. Instead of turning back, Gidyon insists that they travel on to seek who among the other royal families will be loyal to the Queen’s wishes. The are greeted with welcomes, neutrality, arrogant belligerence and betrayal.

This story shares a strong fantasy world with well-developed characters. I liked Elen-Ai as a shadow assassin guarding the young prince. They both grow as they face danger and change together. I liked the adventure and intrigue and would read more in the series to find out how the characters manage in the next phase. I recommend this to readers who enjoy fantasy with action and intrigue.


Source: 2017 NetGalley. This qualifies for 2018TBR, NetGalley Challenge and "Q" for Alphabet Challenge.
Posted by Martha Eskuchen at 10:17 PM