I really enjoy this series!
Devil’s Due
Destroyermen, Book 12
By: Taylor Anderson
Narrated by: William Dufris 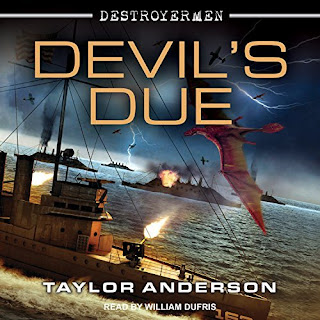 Publisher's Summary
Taylor Anderson continues his powerful New York Times best-selling series of alternate history and military strategy, as the conflict is about to become terrifyingly personal....
Captain Matt Reddy and the crew of the USS Walker have been fighting for their lives ever since their ship was swept from the Pacific to another world and they became embroiled in a deadly conflict between their Lemurian allies and the ravening Grik. But things are about to get worse. With Reddy's family and allies held prisoner by the mad General Kurokawa, the mysterious League and evil Dominion plotting schemes of their own, and the Grik trying to build their swarm and concentrate power, Reddy faces danger on all sides. Although desperate to confront Kurokawa, Captain Reddy fears he's subordinating the war effort for personal reasons. But Kurokawa is too dangerous to be left alone. With the mighty League battleship Savoie at his command, he plots a terrible vengeance against Reddy and his tiny, battered destroyer. The stage is set for a devastating cataclysm, and Reddy and his allies will have to risk everything to protect what they hold dear.
©2017 Taylor Anderson (P)2017 Tantor


Review:
I was happy to be back in this alternate world with Captain Matt Reddy and his brave WWII American crew and new allies. The Alliance forces are spread out facing different enemies. In the last book, Captain Reddy’s wife, Sandra, and a handful of Alliance officials, were kidnapped by the mysterious League of Tripoli. They were turned over to become prisoners of the arch enemy, Japanese General Kurokawa, who has allied with the enemy Grik.

Reddy is sure they are facing a major battle with the Grik. But first Reddy feels he must face Kurokawa who has been given the massive League battleship, the Savoie, Reddy fears the threat posed by that ship in the hands of Kurokawa. Reddy will make a move even though it means putting his own wife in danger.

Brash and bold Silva thinks he has a way to sneak into Kurokawa’s camp to spy the land and locate the prisoners. Meanwhile, Commander Greg Garrett on USS Donaghey is far out in the Mid Atlantic but still manages adventures as the ship encounters a stronger Dom ship.

There are exciting air battles (especially an early reconnaissance flight) as well as sea battles. I enjoyed following the various crews, some facing the Grik and others facing the Dominion. I also enjoyed the scenes with the enemy Grik making their plans.

This is another engaging episode in this fast-paced war adventure series. I love the down to earth characters highlighted in their various dangerous settings. Anderson’s creativity is wonderfully woven in the good action. I also like the character’s contemplation of faith elements introduced into the alternate world.

I picked this up and finished the listen within three days. It was hard to put down. I recommend this series to readers who enjoy alternate history and new species.

Audio Notes: William Dufris continues his wonderful narration of this series and these engaging characters. I love listening to the audio version and am eagerly waiting for the next book, River of Bones.

My Reviews for the Destroyermen Series
Into the Storm -- guess I didn't write a review.