Audible Book Review: Across the Nightingale Floor by Lian Hearn

This is engaging Asian fantasy - action, love, evil and magic.
Across the Nightingale Floor
Tales of the Otori, Book One
By: Lian Hearn
Narrated by: Kevin Gray, Aiko Nakasone 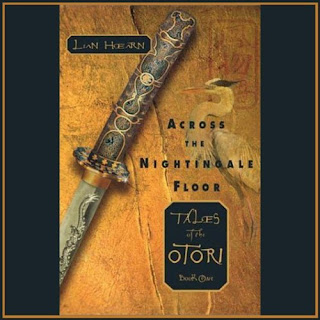 Publisher's Summary
A tour-de-force novel set in ancient Japan filled with passion, fantasy, and feuding warlords. The first volume in the highly anticipated Tales of the Otori trilogy.
Sixteen-year-old Takeo's village has been massacred by an evil warlord, and he is about to be slain by the men who murdered his parents and neighbors. At the last moment, his life is saved by a nobleman, who claims the boy as his kin and begins his education.
But nothing is as it seems. Takeo discovers that he has rare powers that are useful to those around him. As he grows into manhood, he must decide where his loyalties lie: with his noble master and adoptive father; with the Hidden, a secret, spiritual sect whose beliefs are forbidden; or with the Tribe, the assassins and spies who consider him one of their own.
A story of treachery, political intrigue, and the intensity of first love, set in a world ruled by formal ritual and codes of honor, Across the Nighingale Floor crosses genres, generations, and genders to captivate fans of all ages.
Don't miss the rest of the Tales of the Otori series.
©2002 Lian Hearn (P)2003 HighBridge Company


Review:
Takeo, a young boy of 16, is rescued just before being murdered like the rest of his massacred village. Takeo has already set his mind on revenge against the evil warlord who killed his family and friends from the Hidden, the secret religious sect where he was raised.

Lord Otori Shigeru, a nobleman, rescued Takeo to adopt him and educate him in many things, including ninja skills. During lessons it is discovered that Takeo has some rare and useful powers. As he matures he continues to harbor his plans for revenge. But his actions are tempered by the wishes and loyalties to the Otori clan who took him in, accepted him and helped him to grow.

Shirakawa Kaede has had a difficult childhood. She was placed with another household as a political prisoner. She was treated as a slave instead of being educated and respected as the noblewoman she is. Takeo’s adoptive father is directed to marry Shirakawa. This union has been dictated by Iida Sadamu, the evil warlord. who seeks to control the Otori clan and the bride’s clan so they will not join the rebellion against Iida. But the intendeds have other ideas.

As the people come together at Iida’s fortress, each has a different goal. Takeo is kidnapped by another group who what to explain his abilities and show him his responsibilities to their clan. Now his loyalties are torn between three clans and three desires.

This story is quite lyrical which pulled me in and is enjoyable to listen to. I like the writing style with the scenes alternating between Takeo and Shirakawa. I also like the special paranormal skills that Takeo displays. I found the difficulties of the feudal system and the details of the nightingale floor fascinating. The struggles, conflicts and intrigues keep this interesting. I recommend it to reader’s who like Asian fantasy with romance and intrigue.

Audio Notes: Kevin Gray and Aiko Nakasone do a wonderful job with the narration. They present the characters with good accents and portray the emotions fitting the characters and the slightly mysterious tone of the story.