I enjoyed this coming of age fantasy adventure with warrior dragons.
Fledgling
The Dragonrider Chronicles, Book 1
By: Nicole Conway
Narrated by: Jesse Einstein 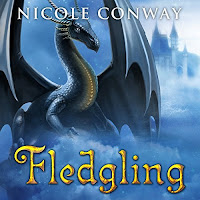 Publisher's Summary
Can one boy stand between two kingdoms at war?
Jaevid Broadfeather has grown up as a wartime refugee, hiding from the world because of his mixed racial heritage. He feels his future is hopeless - until a chance encounter with a wild dragon lands him in Blybrig Academy, a place usually forbidden to anyone but the rich and royal.
But Jaevid's case is special; no dragon has voluntarily chosen a rider in decades, so the proud riders of Blybrig must begrudgingly let him join their brotherhood despite his bloodline. Lieutenant Sile Derrick, a sternly tempered man with a mysterious past, becomes his instructor and immediately takes a peculiar interest in Jaevid's future. While struggling through the rigorous physical demands of training, things begin to go awry. Jaevid witnesses the king's private guards kidnapping Sile in the dead of night. When none of the elder riders is willing to help him, Jaevid begins a dangerous adventure to save his instructor. Everything Jaevid learned at the academy will now be put to the ultimate test.
©2013 Nicole Conway (P)2016 Audible, Inc.


Review:
Jaevid was raised by his mother in a war-torn ghetto as a refugee where the guards scorned the gray elves but other refugees scorned Jaevid as a half breed. He never met his human father until his mother died when he was 12. His father reluctantly allows him to sleep in the barn where he is mistreated by his hulking father, hated by his step mother and tormented by his younger half-siblings.

His father makes fine saddles for the dragon riders. A few years after living with his father, he is taken along to work with him as he goes to the Blybrig Academy to deliver the load of saddles to the dragon riders there.

Jaevid is a brave young man especially considering he is often bullied for being small and thin. He is fascinated by the dragons and sneaks in to see them. He encounters a wild dragon and is able to convince the dragon that they need each other. His being chosen by the dragon gets him accepted into the academy although the rich students don’t think he belongs and are ready to pummel him. He is lucky to make a friend in a mentoring knight, Lieutenant Sile Derrick, and another young student. Sile works the two boys hard in training suspecting that there is something special about Jaevid.

As Jaevid’s training continues it becomes apparent that someone is plotting against Sile. Jaevid and his dragon, Mavrik, are able to step up to save Sile from sabatoge. Months later Jaevid sees Sile kidnapped. Jaevid is unable to convince the other instructors to help so he sets out, with only his dragon, his young friend and a young girl, to attempt a rescue against the king’s guards.

Through the dangerous adventure Jaevid and Mavrik build a stronger bond and more secret talents are revealed. I really enjoyed the development of the friendships for Jaevid who had always been alone. I also liked the fast paced action and intrigue. There are clearly political upheavals surrounding the dragon rider knights though the details are not fully revealed in this first book of the series. I enjoyed this and will want to continue the series at some point. I recommend this to middle graders and adults who enjoy dragon adventures.

Audio Notes: Jesse Einstein does a really fine job with the narration. He portrays Jaevid at the right age and temperament and is able to give the other characters their unique voices too. The audio made the story more engaging for me.