This has warm romance to offset a creepy killer.
Portrait in Death
In Death, book 16
By: J. D. Robb
Narrated by: Susan Ericksen 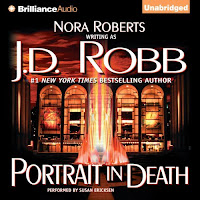 Publisher's Summary
After a tip from a reporter, Eve Dallas finds the body of a young woman in a Delancey Street dumpster. Just hours before, the news station had mysteriously received a portfolio of professional portraits of the woman. The photos seemed to be nothing out of the ordinary for any pretty young woman starting a modeling career. Except that she wasn't a model. And that these photos were taken after she had been murdered. Now Dallas is on the trail of a killer who's a perfectionist and an artist. He carefully observes and records his victim's every move. And he has a mission: to own every beautiful young woman's innocence, to capture her youth and vitality - in one fateful shot....
©2003 Nora Roberts (P)2013 Brilliance Audio, Inc.


Review:
This episode kicks off with Eve looking forward to peace at home as Roark’s majordomo, Summerset, is set to leave on vacation. A misstep causes a delay in that happy plan.

Eve gets a dead body tip from her reporter friend, Nadine. They stand at odds when Eve first refuses Nadine access at the crime scene and then demands that Nadine turn over any files and photos she has regarding the killing.

The photos show a young woman staged as a model – in death. Eve has no witnesses, but several suspects emerge as they pick apart the photos. She must discover an artist obsessed with capturing the innocence and vitality of his victims.

While Eve is busy investigating, Roarke learns a disturbing bit of his own history that causes him to withdraw into himself. The resulting tension and make up scenes are a strong part of this book. JD Robb (Nora Roberts) does an exquisite job of conveying Roarke’s pain, anger and withdrawal. Eve has to fight to get him to share what he has learned. Then, as he has often supported her, she must make an effort to be there when he needs her. This was a wonderfully warm romance element during the investigation of a twisted killer.

The usual great dialogue rapport is present between Eve and Roarke and with Eve’s team members, Peabody, McNab, Baxter and Feeney. There are also moments with Nadine, Summerset and Mavis. All fun and feisty. There is some bad language and of course grittiness related to murders. Still, this provides engaging characters with new mysteries in each book. I recommend the series to those who enjoy strong female detectives hunting down twisted killers.

Audible Notes: Susan Ericksen is the voice of these characters. She portrays each with a unique voice and energy suitable to their character. It is a pleasure to listen to this series which sometimes keeps me up too late. As always, this is great entertainment and narrated with skill and personality.


Source: Audible 2016 sale purchase. This qualifies for Audiobook, TBR and "P" for my Alphabet Challenge.
Posted by Martha Eskuchen at 9:05 PM