I especially liked the history in this mystery. 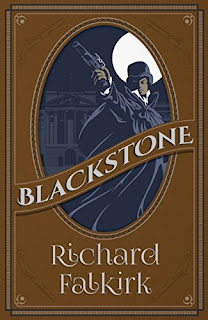 Edmund Blackstone, Bow Street Runner, of doubtful parentage and background, the best if far from the most conformist in the force, secretly applauds the robbers he hunts. He is tall, well-built, with a strongly featured face and, despite his elegant and expensive attire, moves with ease among the thieves and cut-throats in the taverns and soup shops, the cockfighting pits and dirty alleys of London. But if Blackstone has a weakness for professional esteem and flattery, for a woman's touch and for good wine, he is also one of the best shots in London, an expert in almost all areas of crime, a ruthless man with a reputation for courage and persistence, and - first and last - a Bow Street Runner.

In this, the first of the series, Sir Richard Birnie, the Bow Street magistrate, has appointed Blackstone to guard the heir to the throne, the young Princess Alexandrina Victoria. Among the Runners this is considered an honour but Blackstone feels that it is all a waste of time, even a punishment. Then Blackstone himself is attacked outside his lodgings - and there's something about his assailant that seems oddly familiar…


Review:
This is a fascinating portrayal of historical London with a fascinating character. Blackstone was raised on the streets with a criminal background- petty thief and more – until a target took him under his wing and got him into more honest work as a Bow Street runner. Blackstone isn’t all ‘good’ as he is still a rough, tough, and ruthless cop.

Blackstone thinks that being put on duty to “baby sit” the future queen of England, Alexandrina Victoria, is a demotion instead of realizing that he was placed there as the best protector. He isn’t sure there is a plot but then a miniature goes missing so there is something to investigate. But someone doesn’t want him around and he is set up to be removed from the force. That opens the door for a kidnapping to occur during Bow Street watch.

Sir Richard Birnie, the head of the Runners, is stressed because upper officials, speared by Robert Peel, are planning to start a full-time police force which threatens the Bow Street Runners program. Now that the princess has been kidnapped he is relying on Blackstone to rescue the child to show the value of the Runners.

Blackstone has his own weaknesses that get in the way sometimes. Various women at the Estate are interested in Blackstone and/or the man he puts into place undercover. Still, Blackstone is a top-notch detective and surprisingly brave and dedicated to saving the child and his career. His actions are a bit gritty as he doesn’t always use the best methods to accomplish his goals.

Although there is a good deal of sexual innuendo and grittiness, I enjoyed this strong, historical mystery. This novel is clearly well researched. The historical detail of the times, the politics, intrigues and challenges to the Runners is a big plus which I found fascinating. I recommend this to readers who enjoy mystery and especially those who enjoy historical detail.