Book Review and Giveaway: Love in Disguise by Carol Cox

This historical romance is gentle, fun and engaging with mystery and intrigue.

Love in Disguise
by Carol Cox 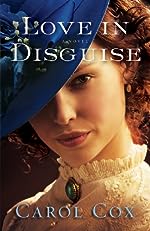 Can she solve the crime before they uncover her true identity?

Jobless and down to her last dime, Ellie Moore hears about a position with the Pinkerton Detective Agency and believes it's the perfect chance to put her acting skills and costumes to use. Reluctantly, the agency agrees to give her one assignment, one chance to prove herself. Disguised as Lavinia Stewart, a middle-aged widow, Ellie travels to Arizona to begin her investigation. When the need arises, she also transforms into the dazzling Jessie Monroe, whose vivacious personality encourages people to talk.

Mine owner Steven Pierce is going to lose his business if he can't figure out who's stealing his silver shipments. In his wildest dreams, he never expected to receive help from a gray-haired widow...or to fall in love with her beautiful niece.

Then the thieves come after Lavinia and Jessie. Ellie isn't safe no matter which character she plays! Should she give up and reveal her true identity? What will Steven do when he realizes the woman he's falling in love with doesn't really exist?

Set in 1880s Arizona, Love in Disguise blends romance, humor, and mystery for a can't-put-down read.


Review:
Ellie grew up in the theater with her acting parents until they died in a theater fire. She continued on as a makeup assistant to a star. When her employer realized a dream to travel to London to act there, she left Ellie behind. Ellie didn’t have other friends in the industry and didn’t have the looks to be on stage herself. She is desperate to find a job when she hears that the Pinkertons are looking for a female to cover an investigation in Arizona.

Ellie is sure this is something she can do but at her initial interview she learns that she doesn’t have the right qualities. Using her ingenuity, and tricks she learned in the theater, she returns the next day and convinces them to hire her. She sets out to meet her partner but discovers another stumbling block along the way. Once again she pushes on with every intent to keep her new job.

She arrives at her destination as Lavinia, a middle-aged widow, and begins to meet the men and women of the town. She needs to talk with more members of the town so she transforms into her characters niece, the sparkling young, red-haired Jessie. She is careful to take notes of her observations and conversations each day but she doesn’t fully know how to uncover those responsible for thefts from the silver mine shipments.

Ellie is attracted to one of the mine owners, Steven, who has been helpful to Lavinia and hopes that she will invest in his mind. Steven escorts Lavinia to church where she begins to renew her lost beliefs in God. Steven also becomes entranced by Jessie, creating lots of conflicted feelings in Ellie. Now Ellie has to juggle her two characters as well as her fears and disappointment that Steven would not be interested in the true person she is...assuming she can figure out who she is.

The story is sweet and fun with a little mystery and danger. Ellie is a lovely character and uses good smarts to gain a job and pursue the investigation. I loved the Pinkerton element that added interest as well as a plausible situation for the storyline. The writing is smooth and made for very easy, quick reading. Most of the ladies in book club enjoyed the story. The one who thought it was just so-so is not a big fan of romance and prefers our mystery reads.

I'm glad I selected this title which I enjoyed. (I liked the cover too.) I would like to read more by Ms. Cox. I recommend this to readers who enjoy a gentle historical romance.


I read this book for Ladies’ Book Club.


ONE (gently read) PRINT COPY GIVEAWAY
US Only

(Don't forget to fill in the form for entry!
I have noticed a few commenters who forgot to enter through the Form.)
For 3 Extra Bonus entries (a) comment on the review, OR
(b) Visit the AUTHOR'S WEBSITE and tell me something you learned or like there.