This is another entertaining crime investigation with two of my fav characters, Eve and Roarke.
Seduction in Death: In Death, Book 13
Written by: J. D. Robb
Narrated by: Susan Ericksen 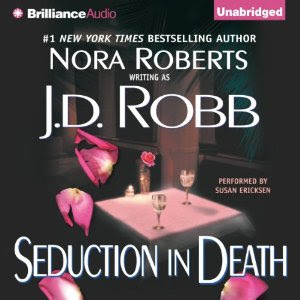 Publisher's Summary
Dante had been courting his victim in cyberspace for weeks before meeting her in person. A few sips of wine and a few hours later, she was dead. The murder weapon: a rare, usually undetectable date-rape drug with a street value of a quarter million dollars. Detective Eve Dallas is playing and replaying the clues in her mind. The candlelight, the music, the rose petals strewn across the bed - a seduction meant for his benefit, not hers. He hadn't intended to kill her. But now that he has, he is left with only two choices: to either hole up in fear and guilt or start hunting again....
©2001 Nora Roberts (P)2013 Brilliance Audio, Inc.


Review:
Eve Dallas knows that evil comes in all shapes and sizes. She is a detective who fights for the innocent dead. The latest victim is a young woman who had fallen onto the sidewalk from her high up apartment. Eve quickly recognizes that the death is not a suicide. The evidence shows that someone romanced her with flowers and wine. Eve correctly suspects she died from an accidental, but lethal, overdose or mix of rare date-rape drugs.

The security cameras caught images of the perpetrator, and he left a trail of fingerprints and DNA. But none of that is in the system and it appears that not even his face is real. Eve and her team are going to have to go the long route to track down the expensive shoes, clothing, flowers, wine, wig, make-up traces and, most importantly, the hard to get drugs, in an effort to tie them to the killer.

A few nights later another young woman is found murdered. This time the death is clearly not accidental - it is intentional and brutal. There is no trace evidence left at the scene of this fragile young woman. Either the killer is upping his game or there is more than one person involved.

Eve is determined, as always, to get the killer(s) before more young ladies die. She isn’t beyond using a little computer help from Roarke who is brought on board as a civilian consultant to help Eve think more like a man in this process of seduction.

The plot is detailed, a bit gritty because of the sexual/rape nature of the crimes, and has effective twists. JD Robb (Nora Roberts) does a wonderful job weaving personal character issues (this episode has the estranged romance between Peabody and McNab) in the background of the crime investigation. This story also reveals the crimes from the view of the killer(s) which adds interest. These books are always reliable entertainment and I will continue to download and listen to them as there is a long list ahead.

Audio Notes: Susan Erickson does her usual wonderful job of narrating this series. She has these characters pinned with personality and voice. I really enjoy listening to the books as I can follow them while doing mindless chores - vacuuming, folding laundry, etc. It makes for enjoyable and productive use of my time.


I purchased this with an Audible credit to continue in the series. This qualifies for my 2015 Audio Challenge.
Posted by Martha Eskuchen at 4:47 PM