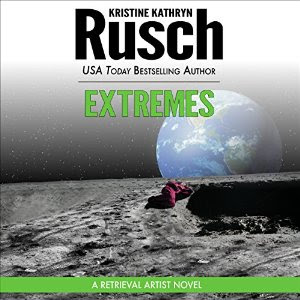 Publisher's Summary
His name: Miles Flint. His occupation: Retrieval Artist. His job: find the Disappeared - outlaws on the run, wanted for crimes against alien cultures. The catch: Flint isn't working on the side of the law anymore.
One simple mistake and a Disappeared could end up dead. But this time, the death of an ailing Retrieval Artist has caught Flint's attention. He suspects it was foul play, not a viral infection. Equally suspicious is a young woman's sudden demise during the Moon's prestigious Extreme Marathon. As Flint investigates, he finds an ominous connection. Both deaths lead back to a scientist - a scientist who is now one of the Disappeared.
Listen to more in the Retrieval Artist series.
©2003 White Mist Mountain, Inc.; (P)2008 Audible, Inc.


Review:
Miles Flint was a police detective who pursued criminals. Now he has retired to become a Retrieval Artist who finds “the Disappeared” - those who disappear because they are on the run, often, although not always, from unintentional crimes against alien cultures.

Miles is approached by a local law firm who wants to hire his services. He is initially uncomfortable about their motives especially when they track his usually secure systems. Miles becomes interested when he learns the case involves the death of another Retrieval Artist. Miles  investigation leads to a connection to a death that has just occurred during a local, prestigious marathon.

The young woman’s death during the Moon’s Extreme Marathon initially appears to be accidental. However, Noelle De Ricci, Flint’s former partner and the reluctant detective assigned to the case, soon uncovers clues that reveal the death as a murder. The event organizers want to keep the murder quiet but that is difficult when all of the staff and  race participates must be detained and questioned. The investigation has to cope with the unique elements and limitations of the moon’s environment as well as trying to uncover motive and opportunity.

I was totally enthralled by the mystery of this story. The author has a wonderful style of sharing the details in puzzle bits the reader (listener) gets to piece together. The threads of the story might at first seem unconnected but the author skillfully ties them together. The sci fi world of the moon city within a dome is well developed and adds intrigue to the details. There is a chase scene that is a bit "out there" but it added excitement and increased pacing in the later portions of the book.

This was the second book I read/listened to in this series and I will not wait so long to listen to another. I appreciate that the book has no sex and no foul language. I recommend this series to those who love detailed mysteries with the added interest of an alien environment.

Audio Notes: I enjoy Jay Snyder’s narration in this series. He is able to convey Flint’s equanimity towards his work and DeRicci’s dedication to the investigation. The narration enhances my enjoyment of this series.


I selected this from my own Audible Library (2012). It is part of my 2015 Audio Challenge and part of my TBR Pile Challenge.

Posted by Martha Eskuchen at 11:00 AM