This is a gripping tale and great listening entertainment.
The Martian
Written by: Andy Weir
Narrated by: R. C. Bray 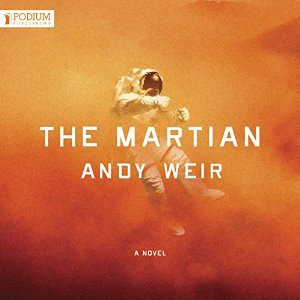 Six days ago, astronaut Mark Watney became one of the first people to walk on Mars. Now, he's sure he'll be the first person to die there. After a dust storm nearly kills him and forces his crew to evacuate while thinking him dead, Mark finds himself stranded and completely alone with no way to even signal Earth that he’s alive—and even if he could get word out, his supplies would be gone long before a rescue could arrive. Chances are, though, he won't have time to starve to death. The damaged machinery, unforgiving environment, or plain old "human error" are much more likely to kill him first. But Mark isn't ready to give up yet. Drawing on his ingenuity, his engineering skills—and a relentless, dogged refusal to quit—he steadfastly confronts one seemingly insurmountable obstacle after the next. Will his resourcefulness be enough to overcome the impossible odds against him?"


Review:
Mark Watney is stranded on Mars when his crewmates, believing he is dead, make an emergency evacuation. Mark is in a hostile environment with damaged equipment. He has no means of communication and limited provisions. But Mark isn’t one to give in and die easily. He gathers what supplies he can find and begins to implement plans for survival.

Mark’s skills as a botanist and engineer come in handy as he uses every creative means he can think of to provide a supply of water and food for an extended period. He doesn’t know if he can survive until the next mission arrives but first things first – he has to survive long enough to find a way to let mission control on earth know that he is still alive and kicking.

Once the mission specialists at home realize he is alive they go to work trying to figure out a way to rescue him. It was encouraging to think the NASA family, superiors and drones of all divisions, would be willing to pitch in hours of overtime and ignore the phenomenal costs to bring Mark home alive.

I was continually impressed by Mark’s ability to find solutions to problems he faced. He has a brilliant mind that works out “jury-rigged” solutions. Most of the fixes I found fascinating but there did come a spot further in where one of the explanations lost me. I enjoyed the mission control personalities, particularly Venkat Kaporr, as they argued their way to difficult decisions.

The story is filled with humor, courage, determination and ingenuity in face of overwhelming obstacles.  It shows the underlying heart of man to cling to hope and strive to survive. I was a little disappointed as I thought the ending was a bit abrupt. Then again— after a whole book of tension, any ending might seem a bit of a let down. As I was a little more than half way through I remarked to my husband: “I really think you would love listening to this story.” His usual reply is “I’ll wait for the movie.” I realized I was happy that he could wait for the movie which I anticipate sharing with him.

I recommend this story to those who love to see man succeed in the face of adversity. Those who enjoy tinkering and figuring out how to make things work would enjoy this too.

A cautionary note: there is some bad language, especially noticeable at the beginning but it is worth persevering beyond that.

Audio Notes: R.. C. Bray does a fine job of capturing the emotional highs and lows of this story. His voices for different characters worked well and his narration made the characters more alive for me, adding to my enjoyment of the story.


This audio is from my own Audible library. It adds to my Audiobook Challenge.
Posted by Martha Eskuchen at 5:30 AM