Book Review and Blitz Giveaway: A Promise of Forever (A Tallgrass Novel Book 1) by Marilyn Pappano

This is a very enjoyable and beautiful small town romance with strong characters and an engaging storyline.
A Promise of Forever (A Tallgrass Novel Book 1)
by Marilyn Pappano 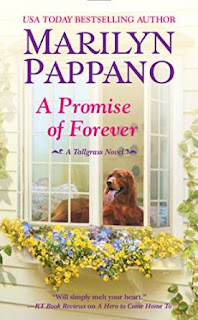 Sergeant First Class Avi Grant's return to Tallgrass, Oklahoma is a long-deferred wish come true. With her final tour in Afghanistan over, Avi can focus on her future-a job here at home and a family of her own. There's just one thing she has to do first: visit her beloved commanding officer's widow and share her grief. The last thing she expected was to feel an instant attraction to the woman's son. Too bad the sexy surgeon is impossible to ignore . . . and even harder to resist.
The sting of his parents' divorce still niggles at Ben Noble. So when a warm, funny, and beautiful young sergeant arrives, mourning his stepfather's loss as strongly as his mother does, Ben can't help but feel conflicted. If his parents taught him anything, it's that love doesn't last-especially with a career soldier. But try as he might to keep his distance, Ben begins to see that Avi-and the spark she brings to his life-is the stuff forever is made of. As Avi's leave ticks away, can Ben convince her to take a chance on forever with him?


Review:
Avi has been determined to be a career soldier since she was ten. She is twelve years in with eight to go. She has seen her share of war in hot spots and suffered the lose of comrades, friends and now the beloved commander who had originally inspired her as a child. She has come home to Tallgrass to visit her family and pay respects to her commander’s widow, Patricia. Avi plans to spend a few weeks before moving to Georgia to take up new duties.

Ben is a highly respected orthopedic surgeon in Tulsa, an hour drive away from Tallgrass. Ben was just a young teenager when his mother left the family to marry an army commander. His father lost interest in life and a hurting Ben was left to raise his younger sisters. He is just starting to reconnect with his recently widowed mother, Patricia.

Lately Ben has been thinking about finding the right woman to start a family with. He is immediately interested in Avi even when she explains that she will only be around for a few weeks. She might not be “the one” but they can have a fabulous fling before she has to go. Neither one realizes that a light fling can turn into a love that will lead to heartbreak when they have to part. After all, Avi has to go where the Army sends her and Ben isn’t one to leave behind his family and career.

I really enjoyed these strong characters, their family and friends. Several side characters, especially Patricia, her neighbor, Lucy, and some dogs with personality added depth and side interests. The writing is clean and flowed very well with an uplifting view even in dealing with loss. Any reader who has lost a loved one, whether in war or other means, could relate to the war widows who gather as the Margarita Ladies. The romance is beautifully developed with lots of chemistry and mostly behind doors sex scenes. The connection is clear without graphic details. I was glued to the story to find out how the romance would end - apart or together?

There is an intermittent story thread of an unconnected character which was curious and not explained until the excerpt for the next book. That seemed an odd way to present another story but it works okay for me. This is the first story I have read by Ms. Pappano and I would be glad to read more of her work. The strong characters, small town interest and conflicted romance can be closely and favorably compared with the style of Robyn Carr. I recommend this book and this author as another “go-to” author for entertaining, contemporary, small town romance.


I received this title from Hachette for an honest review during Blitz Week. It adds to my NetGalley Challenge.
Buy the book!
Amazon
B&N
iBooks
GooglePlay
Kobo
BAM

Known for her intensely emotional stories, Marilyn Pappano is the USA Today bestselling author of nearly eighty books. She has made regular appearances on bestseller lists and has received recognition for her work in the form of numerous awards. Though her husband's Navy career took them across the United States, he and Ms. Pappano now live in Oklahoma high on a hill that overlooks her hometown. They have one son and daughter-in-law, an adorable grandson, and a pack of mischievous dogs.
Social Media Links:
Website
Facebook
Twitter
Goodreads

EXCERPT:
Outside, the sounds of children playing were louder, the splashes indicating that the kids across the street were enjoying one of the last swims of the summer. Avi and Ben walked silently to her car, parked in the driveway.
She nestled the pie plate into the passenger seat, tucked her purse around to hold it in place, then closed the door before turning to him.
So . . . Would he ask for her cell number? Offer his? Make firm plans to see her again before driving away?
For the first time in a long time, the answers mattered.
Linking his fingers with hers, he pulled her to the driver’s side of the car, then stood, invading her personal She liked it.
“Do you have any plans for tomorrow night?”
Yes! “Not a single one.”
He combed his fingers through his hair. “Would you like to go out to dinner?”
She wanted to blurt out the affirmative as quickly as it had echoed in her head, but he went on. “You would have to drive to Tulsa. Tuesday is surgery day, so if I come here, I can’t get here before seven, and I’ll have to head back before nine.”
Drive to Tulsa? An hour or less. No big deal. She’d had commutes between apartments and forts that took longer, and that was just to work. An evening with Ben was such a nicer payoff. “I don’t mind.”
“I usually get out of clinic around six. We could meet at my house around six thirty?”
A smile spread across her face. “I can handle that.”
“Good.” He wasn’t smiling, but his eyes showed something just as encouraging. Relief, maybe, or satisfaction. Hmm. She could show him satisfaction.
He leaned closer, just slightly, and lowered his voice. “I’d kiss you good night, but we have an audience.”
Glancing over her shoulder toward the house, she caught just a glimpse of Patricia before the blinds at the living room window settled. Looking back at Ben, she smiled. “Kiss me anyway.”
He closed the last of the distance between them, lowering his mouth to hers, giving her a sweet, gentle, tender kiss that set her blood on fire. It was impressive and surprising and just a bit scary, considering she’d had tons of kisses that were a whole lot more passionate and evoked a whole lot less of a response.
When he lifted his head, her fingers curled, wanting to wrap around the back of his neck and pull him down again. Her heart skipped a beat or two, and something deep inside her felt deprived.
In the dim light, Ben looked impressed and surprised and a bit scared, too. For a moment, he stared at her, all intense and searching, then he gave a rueful shake of his head. Stepping back, he asked for her cell phone, input his number, and texted it to himself to get her number.
“Six thirty,” he said when he handed it back, his voice rough-edged. “I’ll send you the address.”
“I’ll be there.”

GIVEAWAY
ONE PRINT COPY (US/Canada only). Graciously provided by the publisher.

(Don't forget to fill in the form for entry!
I have noticed a few commenters who forgot to enter through the Form.)
For 2 Extra Bonus entries (a) comment on the review,
OR
(b) visit THE AUTHOR'S WEBSITE and tell me something you like/learned there

* This contest is open to US/Canada only for Print Copy.
* This contest will close 5 PM (Central) July 11, 2015.
WINNER WILL BE ANNOUNCED after July 11, 2015.
Winners will have 72 hours to respond on the winners form linked in the announcement or by email.
Posted by Martha Eskuchen at 1:49 AM