This is an engaging story with alien danger.  "X-Files meet Independence Day" is an accurate tag line. 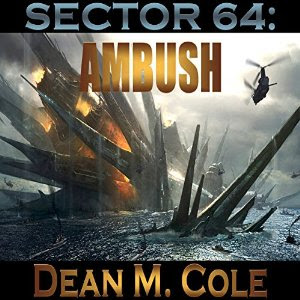 
Publisher's Summary
**Huffington Post - IndieReader Best of 2014**
What happens to present-day Earth if friendly aliens take humanity under their wing?
What happens when their enemy becomes ours?
X-Files meet Independence Day when incredible events thrust Air Force Captains Jake Giard and Sandra Fitzpatrick into a decades-long global conspiracy to integrate humanity into a galactic government. However, as Jake finishes indoctrination into the program, it renders present-day Earth a disposable pawn in a galactic civil war.
Unknown aliens with a dark secret raid the planet.
Within and even below Washington DC, Jake fights through a post-apocalyptic hell, struggling to comprehend the enigmatic aftermath of the first attack. On the West Coast, Sandra's squadron smashes against the invading aliens. Thrown to ground, Sandy wades through blazing infernos and demented looters in a desperate attempt to save her family.
Finally, with the fate of the world in the balance, both captains must take the battle to the enemy--humanity's very survival hanging on their success....
Scroll up and grab a copy today.
©2014 Dean M. Cole (P)2014 Dean M. Cole


Review:
Jake Giard and Sandra Fitzpatrick are Air Force Captains ready to fly to the defense of their country. Jake experiences an X-File type of event while helping a younger pilot friend, Vince, with night flying practice. Something approaches them and first Vince’s jet, then Jake’s, is disabled. Energy returns allowing Jake to break free of a nose dive but Vince isn’t so fortunate. When Jake returns to base he is whisked away as a criminal with no one believing his story. Hours later he is released only after swearing to complete secrecy regarding the event.

Soon after the loss of his friend, Jake is summoned to Washington to meet with another pilot friend from training days. What he learns is full of surprises that start on the ground, continue in the air and on into outerspace. Jack and his friends end up in an epic battle against the alien forces. The race to save Earth comes close to disaster.

While Sandy is wondering where Jake is, Earth suddenly suffers a wide spread and horrible attack. The ships and weapons are nothing known to Earth forces and have a devastating and large kill zone. By a fluke, Sandy survives an attack in California that takes out her full squadron. Shaken and concerned to determine if her parents, who live to the south of the attack, have survived she heads south with orders to provide needed military intel along the way. She has to fight through ground damage, danger and human looters to get home.

The action is engaging and the story has elements that definitely made me think of Independence Day, especially with a strong, kill-minded alien. I enjoyed the history of the advanced Galactic allies, and the long time civil war with their evil, alien enemies. There is some technical detail that added authenticity without bogging down the story. The ending leaves open future engagements between the primary characters and aliens. I recommend this to readers who enjoy sci fi space battle action.

Audio Notes:  Mike Ortega does a solid job with the narration. He provids a unique sound to each of the characters - male, female and alien. The narration provided a steady pacing and easy listening that enhanced my enjoyment in the story.


I received this audio from the publisher through Audiobook Jukebox, for an honest review. It qualifies for my Audiobook Challenge.
Posted by Martha Eskuchen at 7:11 PM