Book Review and Giveaway: The Seducer by Madeline Hunter

This shares a romance leading to redemption of a dark hero.

The Seducer
by Madeline Hunter 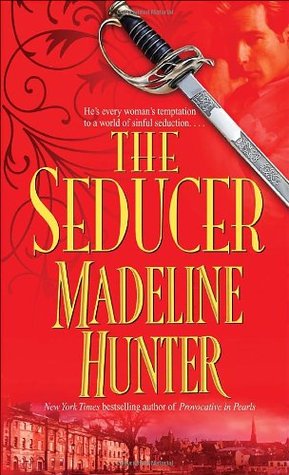 Book Description
Publication Date: September 30, 2003
THE SEDUCER
From the moment he arrived to rescue her, Diane Albret saw more in the darkly handsome, charismatic gentleman than just a guardian. Over the years that have passed since she first laid eyes on Daniel St. John, he had become, quite simply, the most dangerously irresistible man she could ever have imagined. Diane herself has changed from a bewildered schoolgirl, tragically orphaned, into a determined young woman of alluring charm and beauty. Now, leaving the cloistered life of her school, she has been brought to Daniel’s home with dreams of her own amid rumors and hints of scandal. But the legendary seducer seems to have other plans for Diane—and he possesses a secret about her lost past that he will do everything to keep: a secret that will put both their lives in jeopardy, even as the passion they have denied for so long threatens to break out of all control.


Review:
Diane Albret, raised in a girls’ home since a toddler, doesn’t really remember her past. However she obsesses on finding a family connection to ease her sense of being alone. Now Diane is grown and facing trouble from one of the staff. Her guardian, Daniel St. John, whom she knows as “the Devil Man” who visits once a year, is called in. Diane is more clever and observant than they realize. She recognizes a danger in St. John but she also sees more - and a way out. She weighs the consequences of remaining in the home or going with St. John where she plans to seek a governess position while seeking her ancestors.

St. John, although handsome and sophisticated, is primarily a harsh-visaged, curt man. When he sees that Diane had grown to be a fetching, innocent beauty he realizes that he can use her in a plan of revenge. He takes her home where Diane is relieved to discover his crippled sister, Jeanette, who will serve as a chaperone and mentor to Diane.

St. John and Jeanette won’t let Diane pursue her goals of finding a suitable position. Diane tries to resist being drawn into the setting of luxury and comfort as she suspects there will be a price to pay. Slowly friendship, affection and attraction pull her in. Jeanette senses St. John’s plans and argues with him not to allow any harm to Diane. St. John assures that he plans to protect her but soon that sense of protection begins to interfere with his plans of revenge.

St. John, as a dark man obsessed with his plans of revenge, is not an easy character to like. Fortunately Diane’s willingness to look for the good in others manages to pull St. John into a more likable person..
St. John's and Jeanette's secrets are not shared until well into the book when the twisted connections of enemies and pawns are slowly revealed. This gives understanding to the darkness that covers St. John and the sorrow that surrounds Jeanette.

I found the story hard to get into because of St. John’s dark character. I was also disappointed at Diane’s volatile personality - acute observation at times and cluelessness at others. Yet, as the story progressed and the depth of the treacheries was revealed, I found myself satisfied with the development of the romance. There is danger and sensual passion that seep through the story. There were times when more than one character could be considered ‘the seducer.’ I recommend this to readers who enjoy regency romance and who are willing to push past a dark beginning.


I have had this series on my TBR shelf for some time.
The Seducer series consists of seven books, all set in early 19th-century Great Britain. Their order is: THE SEDUCER
THE SAINT
THE CHARMER
THE SINNER
THE ROMANTICLORD OF SIN and LADY OF SIN which are spin-offs of the series. They are not as closely tied to the others. However, they take place in the same world, and characters from the series appear in them.
The next book in the ‘connected romances’ deals with a man who is a lighter, more charming character and I am looking forward to reading that down the road. I really enjoyed this author's Medieval romances which I read before I started blogging.

ENTER THIS GIVEAWAY for my Print Copy.

ENTRY FORM HERE
Don't forget to fill in the form for entry!
I have noticed a few commenters who forgot to enter through the Form.
For 3 Extra Bonus entries comment on the review, OR
visit THE AUTHOR'S WEBSITE and tell me something you like/learned there.
* This contest is open to U.S. address only for print.* This contest will close 10 PM (Central) on May  4, 2014.The winner will be randomly selected from all entries.WINNER WILL BE ANNOUNCED after May 4, 2014.
Winners will have 72 hours to respond by email or the winners form linked in the announcement.
Posted by Martha Eskuchen at 12:43 PM