This is another hard to put down addition to a wonderful series.
Night Broken: Mercy Thompson, Book 8
Written by: Patricia Briggs
Narrated by: Lorelei King 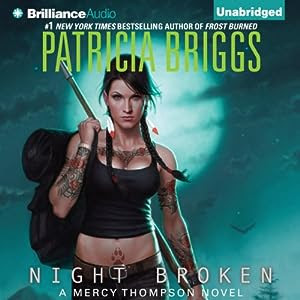 #1 New York Times bestselling author Patricia Briggs’s Mercy Thompson series has been hailed as “one of the best” (Fiction Vixen Book Reviews). Now Mercy must deal with an unwanted guest—one that brings a threat unlike anything she’s ever known.
An unexpected phone call heralds a new challenge for Mercy. Her mate Adam’s ex-wife is in trouble, on the run from a stalker. Adam isn’t the kind of man to turn away a person in need—and Mercy knows it. But with Christy holed up in Adam’s house, Mercy can’t shake the feeling that something about the situation isn’t right.
Soon her suspicions are confirmed when she learns that Christy has the furthest thing from good intentions. She wants Adam back, and she’s willing to do whatever it takes to get him, including turning Adam’s pack against Mercy.
Mercy isn’t about to step down without a fight, but there’s a more dangerous threat circling. Christy’s stalker is more than a bad man—in fact, he may not be human at all. As the bodies start piling up, Mercy must put her personal troubles aside to face a creature with the power to tear her whole world apart.
©2014 Hurog, Inc. (P)2013 Brilliance Audio, all rights reserved.


Review:
Mercy has begun to settle in with her mate, Adam, who is the head of the Tri-City Ware pack. Although she has been brought into the pack as the alpha’s mate, not all the members totally support her since she is a coyote shifter not a wolf. This problem intensifies when Adam’s ex-wife, and Jessie’s mother, Christy, seeks refuge with Adam as she is running from a stalker. Jessie feels that Christy abandoned her and Adam but several of the female pack members were friends with Christy and they are quickly sucked back into her helpless, self-absorbed, manipulative acts. Mercy has to struggle to choose the higher ground rather than call Christy on her bad behaviors.

The tensions are running high in the household and then the stalker shows up and attacks Mercy. Mercy could hide but she knows that the confrontation will be on the monitors. She decides she has to take a stand and face the guy with his vicious dog. Of course that was before she learned the guy and his faithful companion are far from ordinary. The guy is some type of volcano god who is nearly indestructible. Fortunately Adam arrives just in time to help protect her. Tad, who helps at the garage, uses unrevealed fae magic to temporarily secure the enemy who then escapes through the concrete floor. But the obsessed, evil god-man is mad and convinced that Christy is his long lost mate. He is prepared to take out the pack to get to her.

Adding to her worries, Mercy has been approached by a powerful fae who wants her to return the walking stick that used to follow her around. After the stick turned itself into a deadly weapon Mercy gave it to Coyote. As Mercy searches for Coyote she discovers she has a half brother, Gary Laughingdog, who has visions and reluctantly realizes he is going to have to stick around and help the pack face this evil god-like creature.

I love all of the action and creative danger in this series. I also love the extreme warmth portrayed through the family and pack bonds. Ms. Briggs does both of these elements beautifully keeping the series successfully entertaining and fresh.

Audio Notes: Lorelei King does a great job with this series. She manages to convey the emotions and personalities, particularly of the primary characters. The narration enhances the reading experience for me as it makes it an easy, gripping listen.


I really like this series so I purchased this with a February Audible credit!
Posted by Martha Eskuchen at 9:30 PM