Book Review: Book 3 of The After Days Trilogy by Scott Medbury

Book three in this series moved the story forward and brings the community to a point of evacuation. 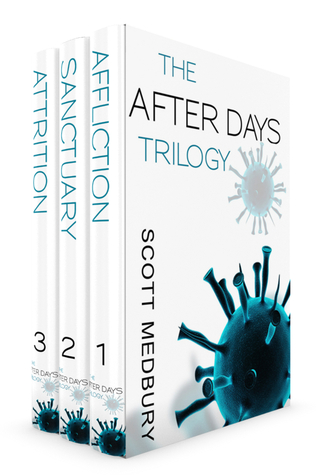 The complete After Days trilogy
Fifteen year old Isaac Race has already lost everyone close to him. He is about to lose a lot more. We all are. A mystery outbreak sweeps North America, it is chilling in both its speed and deadliness. The odd thing is though, it is only fatal to adults. Too late, it becomes clear to authorities that the virus is man made - a biological weapon - and that the United States is at war... a war it has already lost.
As his country is invaded and occupied, Isaac must help his ragtag group of survivors find refuge in a world turned upside down. A world full of fear and danger. A world where enemies can be friends and friends... worse than enemies.
Don't miss Scott Medbury's After Days, the dystopian trilogy destined to become a classic.
This version includes:
Affliction
Sanctuary
Attrition


Review:
I read book from the middle of Sanctuary (book two) through book three, Attrition. This picks up where the young survivors led by Isaac manage to escape from what they thought would be sanctuary but turned out to be a tyranny led by a mad professor. The escape is not without chase and death, but once again the survivors struggle on to find a new safe place. They find a valley farm where they begin to settle in.

As they return to inspect the surrounding cities, they find that the mad scientists counter chemical attack has succeeded. Isaac and friends release enslaved American youth but not all of them are receptive to friendly survival. One particularly sullen youth, Ash, takes off with a Hummer full of weapons. It soon becomes clear that Ash will become a brutal enemy.

The book moves fairly quickly over early years of survival for the valley colony which grows from natural pairings and outsiders seeking to join a safe community. Finally, an attack by some of the marauding army, pushes the peaceful survivors to evacuate their valley home in search of another safe settlement.

As noted in my review of Books 1 and 2, the writing is not complex, but it is consistent, and, I am glad to say, it does not resort to ugly vulgar language. Basically, the main characters continue with the addition of a couple more key additions. There are some areas which I thought were just too convenient or easy for the survivors, but it moved the story along not getting too bogged in details of farm survival. This allowed for a good mix of action with some relationship development.

I am likely to continue with the next books (as a boxed set) at some point. I recommend the boxed sets (better value) to fans of post-apocalyptic/dystopian.

[This is the same or previous edition of America Falls. Affliction and part of Sanctuary became America Falls Book 1, Hell Week and Book 2, On the Run, which I listened to in October 2021.]